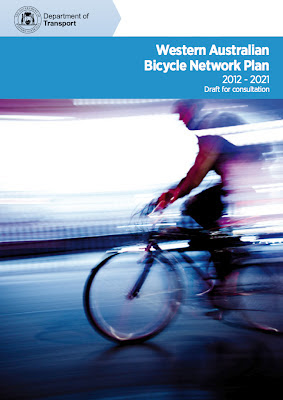 I am pleased that there are signs of progress but I am also underwhelmed with the content. Most of the proposals are obvious. Did it really take sixteen years to produce this? There are a few too many references to doing more "reviews" and things like a "strategic and operational development plan".
Another worrying aspect is that there is no money allocated yet to do the work. The plan shows an intention to increase the spending on the Principal Shared Paths from $0.91 million to $10.91 million per year and the overall spending is planned to be about $16.7 million per year. At first this seems like a lot of money but it represents only 1.39% of the Western Australian budget for roads. 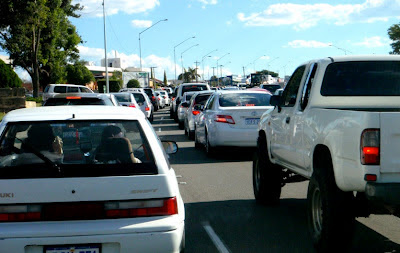 I will be thankful if all of the proposals are implemented but I think we need to have higher expectations. If we are to achieve the goal of doubling the number of people cycling in Australia by 2016 as described in the Australian Government's National Cycling Strategy we need to move faster and have more money and resources directed to bicycle infrastructure.
Here is an idea. The modal share for bicycles is 1.6% (2009 figure) and if our aim is to double this to 3.2% then we should have 3.2% of the road budget allocated to bicycles. This is a small percentage, not much to ask for really.
The current Western Australian state budget for roads is $1.2 billion per annum which would mean $38.4 million per annum for bicycles. With this amount we could actually get things moving. 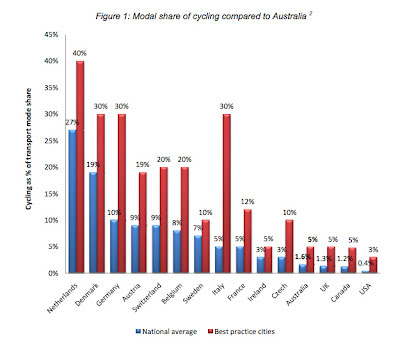 Another idea. Given that we all know the obvious health benefits associated with cycling, perhaps we could divert a tiny amount from the Western Australian health budget.
Call it preventative medicine. We should not dare to ask for much, we all know that the hospitals are struggling. How about just a quarter of one percent?
The Western Australian health budget this year is $6,217,600,000 that would give bicycles another $15.5 million. 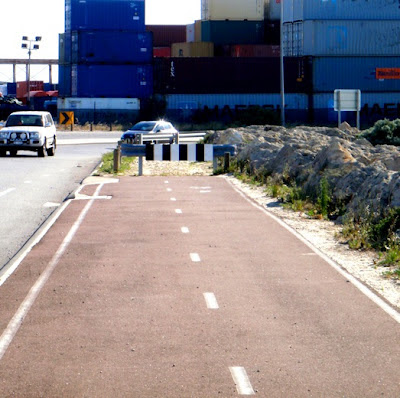