I recently noticed this new bridge. It's part of the Roe Highway upgrade and connects the residential areas of East Cannington and Beckenham to the heavy industrial area of Welshpool. 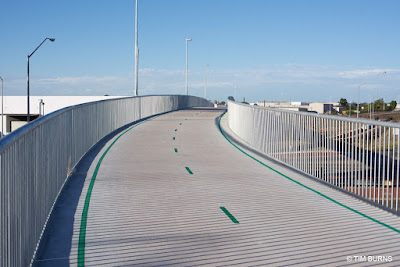 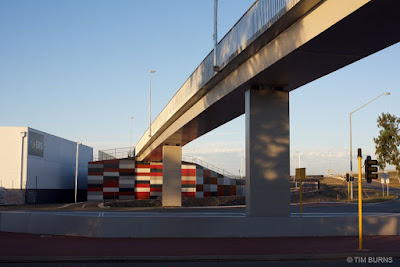 It's impressive. The width of the main path through this area has been made to the new PSP standard of 4.0 metres. On the bridge section, the width is actually 4.6 metres between the railings. This bridge eliminates the need to make a multiple stage crossing of the busy intersection at ground level. 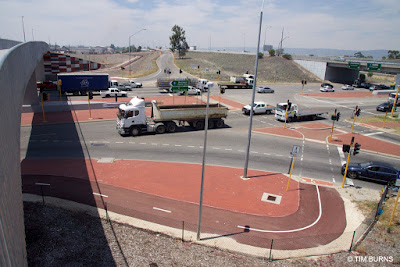 The span across Orrong Road is about 120 metres long, plus there has been significant earth works on both sides to achieve a gradient suitable for cycling. 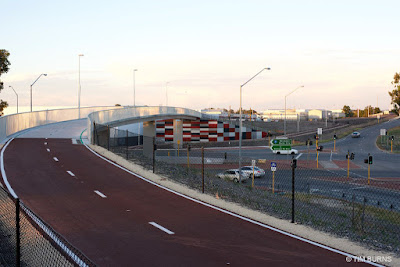 There are three additional side-ramps connecting to the main path. The overall length of the project must be around 300 metres. 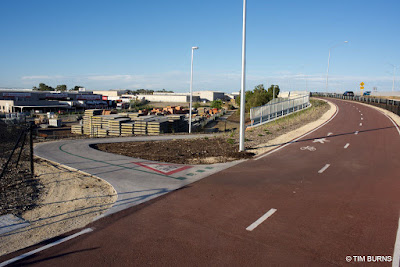 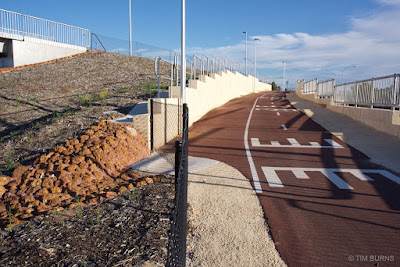 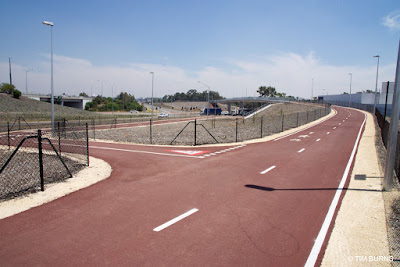 For comparison, the photograph below shows the much-lauded Cycle Snake / Cykelslangen bridge in Copenhagen. It's 4.0 metres wide between top rails and 4.6 metres at ground level - very similar. And its length, is 190 metres. Overall, the Perth bridge was a bigger project.

Orrong Road and Roe Highway are part of a road network designed for very large trucks with oversize loads. The heavy industrial area of Welshpool is often the starting point for massive loads travelling to mine-sites in the state's north-west and eastern goldfields. The height of this cycle bridge has been designed to accommodate trucks with oversize loads up to 6.5 metres high traveling underneath. A standard truck has a maximum height of 4.3 metres. 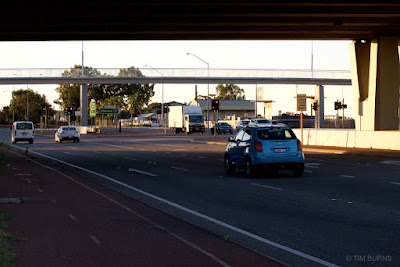 This extra height requirement would have resulted in the whole project becoming larger and more costly. It would have required many more tonnes of earth works and much larger retaining walls. The hills here are not natural. This was originally a flat, swampy area. 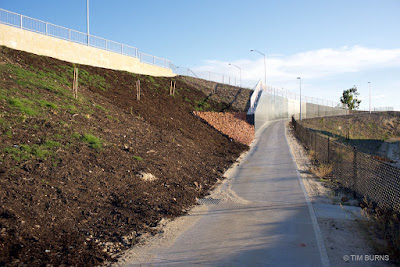 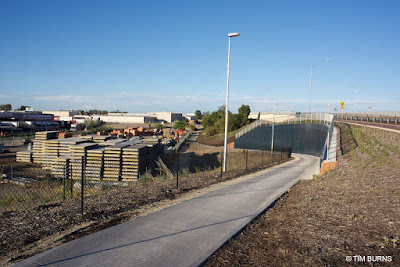 The path is not busy. You can visit here for more than an hour without seeing anyone on foot or on a bike. Why was it built? I'm not complaining, but it's an obvious question, without an obvious answer.  I suppose this would be called building-for-the-future. This is amazingly good infrastructure in an area with a mode share that is probably less than 1%. The Western Australian state government has made a commitment to expand the PSP network within a 15 kilometre radius of Perth. This is part of that process. 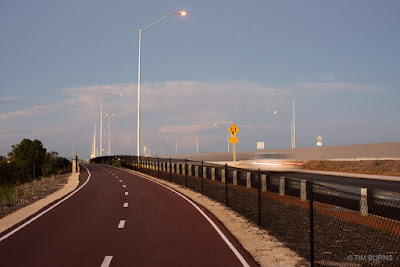 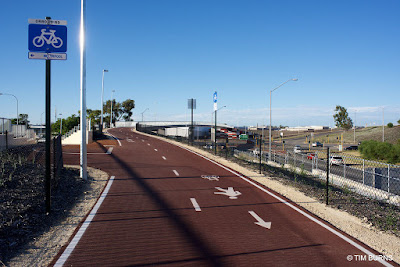 The Orrong Road bridge has been done without fanfare. I have not been aware of any media release or special announcement. It's part of the large Roe Highway Upgrade project which has a budget of $41 million. This connects with the even larger $1 billion Gateway WA project. Perhaps when there is so much money flowing for highway construction, building a top-class cycling bridge at same time is made easier. 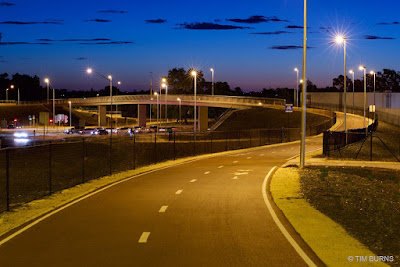 I've called it a cycling bridge but officially these are shared paths. Curiously, Main Roads WA list this as a "footbridge" even though pedestrians are highly unlikely to use it. The residential area of East Cannington nearby rates as a "car dependant neighbourhood" on Walkscore. Many of the streets don't have footpaths and it is common to see three or more cars parked in the front yards of houses. 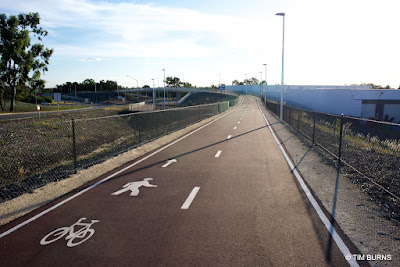 Perth is not a cycling utopia. We have some good parts but there are still lots of missing links to the PSP network. There are also missing bridges. The_Causeway across the river between Victoria Park and East Perth is an example. It's much closer to the central city than the Orrong Road bridge and has potential to be one of the main cycle routes into the city for commuters. Currently, pedestrians and people cycling share a bumpy, narrow bi-directional path on the southern side of the two bridges. The two-metre wide path is used by a lot of pedestrians and this will only increase when the nearby high-density Riverside development is complete. There has been talk about parallel cycling bridges for several years.

Update 20 December 2017
The Department of Transport have provided some information on the Orrong Road bridge:

"The rationale behind the bridge was that this location would have been the only at grade crossing on the Roe Highway PSP between Kwinana Freeway and Tonkin Highway.  The new bridge and construction of the missing 1km of PSP have resolved this issue and the route now provides a great safe link into the hills for the more serious rider and recreational opportunities for local residents.  It also ties in nicely with the extensive Gateway project PSP network and the under construction Northlink project.  Ultimately, it all forms part of the high level PSP network that will cater for commuters, recreational cyclists and training cyclists."