North Cottesloe Primary School has a problem. A lot of parents use cars to deliver their children to school. The car parks adjacent to the school are busy and near full capacity at morning drop-off and afternoon pick-up times. The "kiss-and-drop" car park on the southern side of the school sometimes has drivers queuing onto Eric Street which can cause congestion problems for general traffic.

The car park on the western side of the school can only be reached by crossing Railway Street. Although Railway Street has a children's crossing with traffic warden on school days, many people cross unsupervised directly from the car park area.

Similar to most Australian schools, the amount of car traffic makes it risky and unpleasant for people walking and cycling.

In 2015 the school board resolved to improve the situation with "the clear objective to create a more accessible and safe environment for the school, while attempting to effect improvements for the community" (Railway Street Car Park Design Proposal, M. Goodlet, 2017).


The main idea has been to create a new "kiss-and-drop" area on Railway Street with enlarged car park. Over the past four years the concept and proposed designs have been controversial issues with local residents. The Town of Cottesloe has called for public comment on the latest proposal. Comments close on 12 November 2019 at 4pm, there is not much time left.  Here is a simple summary.

The school is located on the corner of Eric and Railway Streets. The Fremantle railway line is nearby and there are many mature trees in the railway reserve. 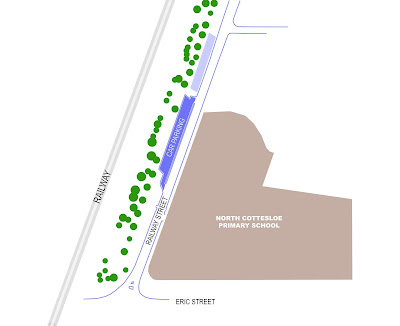 The first proposal was a large new carpark with drive through "kiss-and-drop" facility adjacent to the school. The street would be realigned further to the west. This would eliminate the need to cross the street from the car park and would have doubled the number of car parking bays. 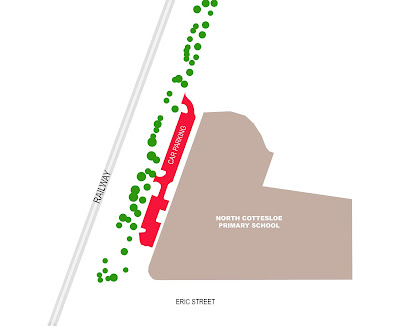 This design was a typical car-orientated engineering solution. It seemed very functional but took up lots of space and would have required the realignment of Railway Street into the trees. The potential loss of up to 24 mature trees meant this plan was rejected. 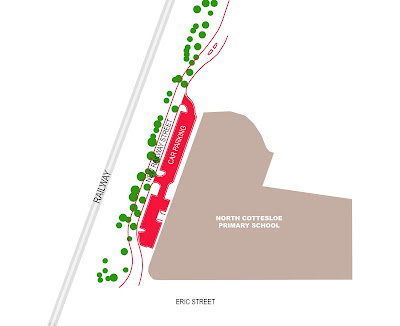 This plan aims to retain almost all the trees and has a more compact design. 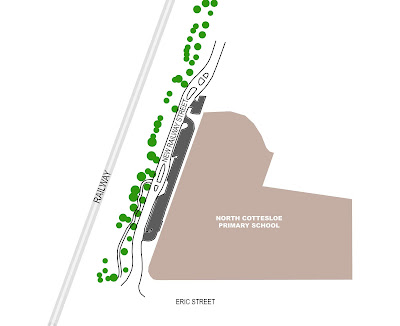 Plan B is an improvement on Plan A, but we should be considering if we are on the right track. Is Plan B just doing-the-wrong-thing-better? The current budget for these works is $550,000 to $700,000. The Town of Cottesloe is not planning on providing all the money. They are planning on providing $350,000 from Cottesloe ratepayers, the rest they hope to get from the state government. In other words, the rest of us. Should we spend half a million dollars on encouraging the people of Cottesloe to drive their children to school?

Everyone wants the streets around our schools to be safer. One of the best ways is to reduce the amount of car traffic. However, building a bigger car park and another "kiss-and-drop" facility is similar to adding another lane to a freeway. This is the school version of induced demand.

There is another option.

The Town of Cottesloe should consider a modal filter on Railway Street. This would stop car traffic travelling all the way through the street and allow the existing car parking area to become much safer.  With less traffic and without high-speed traffic, the existing street could be used as a drop-off zone. This would be much cheaper, quicker and easier.

The filter could be made in a variety of ways. Most commonly bollards are used, but those can be supplemented with a range of landscaping devices including trees to make the area an attractive addition.

The modal filter could be applied at all times, or just during the important school hours. The times when we are hoping to keep our children safe. 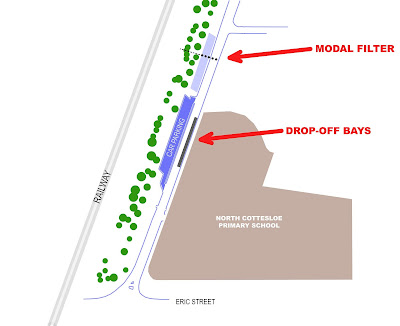 For those not convinced, the modal filter solution is simple enough to be done as trial before committing to the expensive (and unfunded) Plan B idea.

A modal filter could save the Town of Cottesloe and Western Australian tax payers more than half a million dollars and achieve a better result. Instead of supporting and encouraging motor vehicle traffic around schools, we should be looking a ways to reduce it.