This news article from The West Australian newspaper is a couple of months old but I thought it worth repeating today because a lot of people may not have read about it. 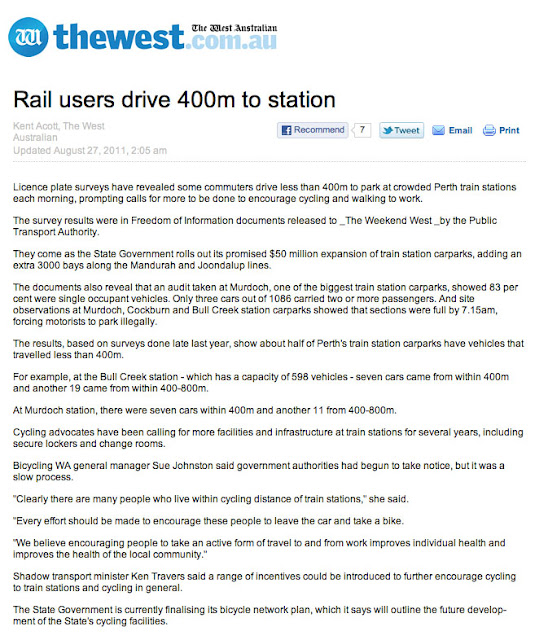 http://au.news.yahoo.com/thewest/a/-/newshome/10123617/rail-users-drive-400m-to-station/
It is easy to own a car in Perth. We have a lot of space, parking is often free and our fuel is relatively cheap. A lot of Australians complain about our fuel costs but when compared with the rest of the world we don’t pay a lot. A quick search on the web will show that there are at least fifty countries that pay more for the stuff than we do. One chart I found today listed Australia at 81st highest fuel cost*.
Just because we own a car, it doesn’t mean we should drive it all the time. The survey found that 25% of the people parking their cars at the Bullcreek train station lived less than 800 metres away. Those people should be ashamed of themselves. Even if they don’t own a bicycle, 800 metres is an easy walk. No wonder we have become one of the fattest nations in the world. Am I being too hard? Maybe it was pouring with rain on the day of the survey?  Or, maybe it was one of our baking-hot 44 degree days?
I thought I should have a look for myself so I caught the train to Murdoch station. It has a bigger car park than Bullcreek station so thought it might have more to see.  I arrived at 11am. The car park was completely full, not a spare bay anywhere. More than one thousand cars sitting in the sun. There were twenty-three bikes. 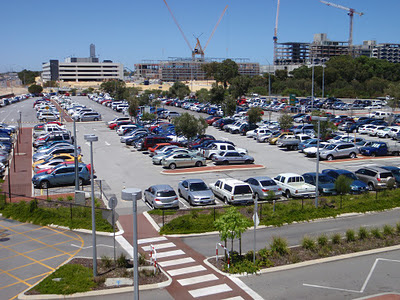 It was a great day for a ride.  One of those beautiful Perth days. A cloudless blue sky, minimum temperature 12, maximum 29 (Celsius of course), humidity only 29%.  It is nearly summer so there is plenty of daylight, dawn was 5am and sunset at 7pm.
Most of the cars were parked all day for free, approximately one-third had to pay $2. Only $2 for all-day parking. You can pay $4 for a coffee in Perth. I guess Transperth is trying not to discourage people from using the train. That is a good thing but I can not help thinking that the price of parking should be higher.
While I was taking photos there were a few people in cars circling the car park looking for a space. One woman was there for at least ten minutes and eventually drove away. Maybe she drove to the next station up the line but that car park would have been full as well. If she lives close by, maybe she will walk or ride next time, but if she lives 50 km away I think she will not bother trying to use a train again.
If we build another 3000 car bays we might get a few more people onto trains but it would be so much better to think of a way to get people onto bicycles? 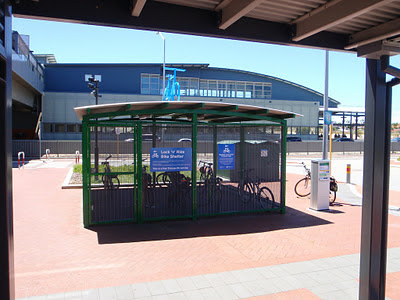 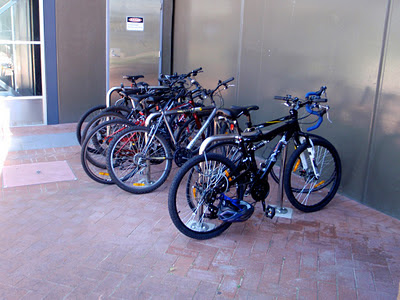 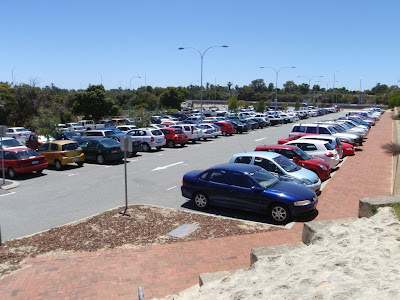 Email ThisBlogThis!Share to TwitterShare to FacebookShare to Pinterest
Labels: train