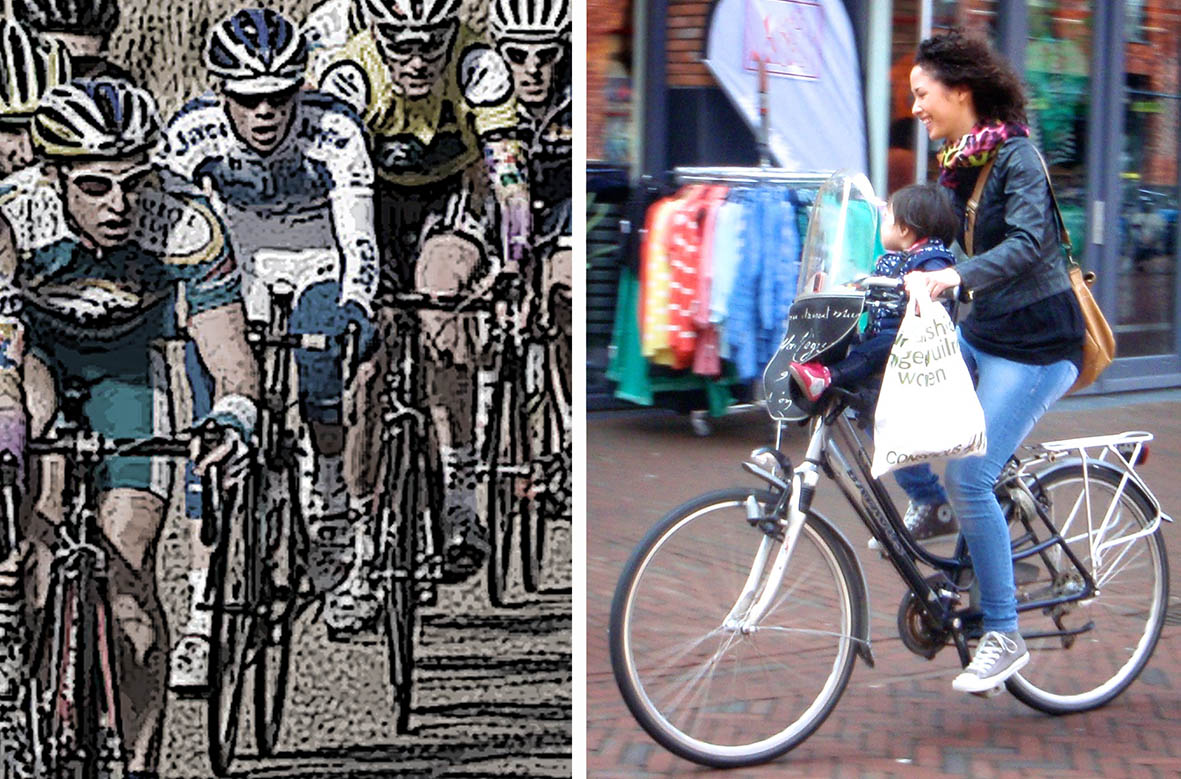 The bicycle can be used for sport, or transport. During the past 40 years Australia’s concept of the bicycle has shifted so much the majority of people now just consider it a piece of sporting equipment. We like to think of ourselves as a sporting nation, and we know you don’t have to be an Olympic athlete to participate in sport. Therefore, millions of us own bikes.


The amount of time we actually use them can vary dramatically. Some enthusiastic people will get out on their bikes a few times a week and clock-up hundreds of kilometres riding around the streets in the early morning. At the other end of the scale, it is typical for families with young children to own bikes and ride them around their local park occasionally. Perhaps for an hour or two, every couple of weeks, but only when the weather is suitable. It’s good exercise and good ‘family time’. Sometimes they won’t bother with the bikes and just kick a ball around instead.

It can be a hassle dealing with bikes, especially if you don’t have a good park nearby. Loading bikes into the car and driving to a park can feel like a mission.

We carry bikes in cars because most of us don’t feel safe riding on busy roads. This is also the reason the majority of us stop riding bikes as we get older, and once the kids have grown up.

Australians who are older than forty will probably remember riding a bike to school - it’s what we did back then. But now, a lot of us drive our kids to school. Things have changed.

Lot’s of things are different. We don’t accept death on the roads as much as we did in the 1970s. The road toll back then was huge. It’s much better now. We have all become very safety conscious. And there are more cars now. Lots more. And traffic is bad.

That’s interesting: it’s safer to drive now, but the roads are busier.  Since the 1970s in Australia, it has become safer in a car but not on a bike.

There are multiple issues involved, but one of the key factors during the past forty years of safety and transport efficiency advancements, has been that Australia has continued to build a road network that facilitates movement of people in motor vehicles and on foot, but not on a bicycle.


Mixing people on foot and on bicycles is not ideal but can function OK if the area is not crowded and speeds are slow. However, it is bizarre that during a period of significant safety advancement in Australia, people sitting on a skeletal combination of steel and rubber are expected to share the part where there are moving motor vehicles. A bicycle is not a protective shield, it‘s just somewhere to sit.

While Australia (and the UK and North America) continued with this problematic two-mode network, the Netherlands adopted a three-mode network. It’s simple really. Instead of leaving bikes behind, they took them on the same safety journey.

This has enabled the Netherlands to maintain bicycles as a common transport device. The social consequences of adopting this three-mode principal has been dramatic.

Dutch children are able to have independent mobility. In the early years they are accompanied by their parents to school as they develop their riding skills, then by the time they are eight or nine, they are able to travel by themselves.


Meanwhile in Australia, the majority of our children have restricted mobility. They must wait to be taken places by car. Being a parent in Australia also means being a taxi driver.

Most people living in Perth are aware how much easier it is to drive during school holidays. In 1970, 16% of Australian children were taken to school by car, now it's about 63%. The figures vary between each state but the trend is clear (Heart Foundation report 5.6 MB PDF).

The three-mode system also allows older people to have independent mobility without the stress of driving. Wide bicycle paths that form a connected network, separated from motor vehicles, allow the Dutch seniors to get out and about. They are not sitting at home waiting for a weekly visit from their adult children. They can do their own shopping and are able to have a more active social life than Australians.

The other group of people who are able to use this third network are those with disabilities. Smooth, continuous paths designed for bicycles are also ideal for wheel chairs and other motorised mobility aids.


At the Velo-City Global 2014 conference in Adelaide, it was heartening to hear Manfred Neun, the President of the European Cyclist Federation, declare the organisation will be pursuing access to bicycle riding and infrastructure on an international level and this would include the United Nations. He stressed: "Active mobility is a basic human need, and must be a human right".

The photographs above feature the Netherlands because I took them during a recent study tour. Of course, other European countries also adopted the three-mode principle. Denmark is a prominent example, in particular the city of Copenhagan. Now other enlightened cities around the world are progressively installing separated infrastructure because they acknowledge the importance of providing an option of bicycle riding for all people. As Steven Fleming wrote after the conference:


"Velo-City has shown there is no further need to argue the case for separated bike infrastructure. There is a global consensus, held now as well by all major players on the Australian bike scene. Separation is key to making cycling mainstream. It has been proven in car crazy cities from New York to Saville."

This report from the USA Protected Bike Lanes Means Business provides some useful facts and figures for any sceptics you might encounter (2.5 MB PDF).

The current policies in Australia are not working. The National Cycling Strategy 2011-2016 had the objective to double the participation of people bicycling riding during those five years. The interim statistics for 2013 actually show a drop in participation after two years!

This change needs to start at the top. The Austroads standards need to be rewritten, again. Reading Cycling Aspects of Austroads Guides (2014) is depressing. The majority of the specifications, which deal mostly with on-road bike lanes, only suit the 5% of people who are already riding. The other 56% of the population who have bikes in the shed will not use their bikes for transport unless there is a dramatic change to the urban environment. At best, they will ride a few times a year, on a sunny Sunday in a park somewhere.

The majority of people will simply not ride a bike next to motor vehicles travelling at 50 or 60 km/h. I frequently see examples of Australian 'best practise' bicycle facilities go unused. It is a waste of money and resources.

This on-road bicycle lane next to Shenton College does not get used. The students riding bikes prefer the safer option of being on the footpath even though they're at risk of being 'doored' by the other children arriving by car.  Shenton College has 1200 students and only around 5% travel by bike.


This on-road bicycle lane on the new section of Great Eastern Highway was made with a width of 1.8m, has top quality green paint at intersections and detailed road markings but it is rare to see anyone using it.


It is more common to see people using the footpath. The speed limit on this section of the highway is 60 km/h. These types of lanes are not used by all of the existing 5% of riders, so there is little hope the other 95% of people will use them.

This road in Midland was completely redone a few years ago as part of the railway Workshops redevelopment. It has generous proportions, expensive landscaping and an on-road bike lane that most parents would not allow their children to use.

THERE'S NO LACK OF MONEY

What is worse than the basic Austroads standards is when those standards are not even applied. There are multiple examples of roads being realigned and neighbourhood streets being upgraded without any provision for riding bicycles.

This issue is not about Australia having enough space or money. It's about changing our thinking from two modes to three. Adelaide's North Terrace is an example of a street with plenty of space, a beautiful expensive footpath, yet no safe or legal provision for people on bicycles.

Newcastle Street in Western Australia had a full makeover a few years ago. Fancy paving, new kerbs and landscaping that included trees planted down the centre of the road. This central island in the road provides a refuge for pedestrians but has narrowed the carriageway so there is no room to pass a person on a bicycle. The speed limit here is 50 km/h.

A CHANGE IN THINKING IS REQUIRED

The towns that I visited in the Netherlands were not all beautiful. The amount of money spent on materials and landscaping in the streets did not appear to be any more than what we spend in Australia. Perhaps even less, some of the streets are quite shabby by Perth standards but they function in a way that is fairer for all people.

The money for roads in Australia is already available, the issue is how we spend it.

Once we stop thinking about the bicycle as just a piece sporting equipment and remember our history of using it for transport, we can stop having the pointless debates about a minority group called "cyclists" and get on with providing transport options for the majority of people.

In Western Australia, only 1.3% of people ride a bike to work or school, yet there is at least one working bike in 61% of households. Obviously most people, even when they own a bike, do not want to travel to work, school or the shops wearing Lycra and a helmet, in single-file next to fast moving motor vehicles. That's the main option available right now.

Australia, it's time to stop taking baby steps with infrastructure and treat the bicycle with the respect it deserves, as an efficient transport option for all people. Our aim should be to provide protected or separated bicycle lanes where ever possible.

I want our children to be able to ride home from school, relaxed, chatting with a friend, on a path that is wide, safe and separated from motor vehicles.