This is how we do it in Perth when we have a blank canvas. This street in Ellenbrook is brand new, a greenfield development. It has been constructed before any buildings in a relatively flat sandy area. Any established trees or bushes were cleared away to ensure there were no obstacles to hinder the design yet we have something disappointingly mediocre. 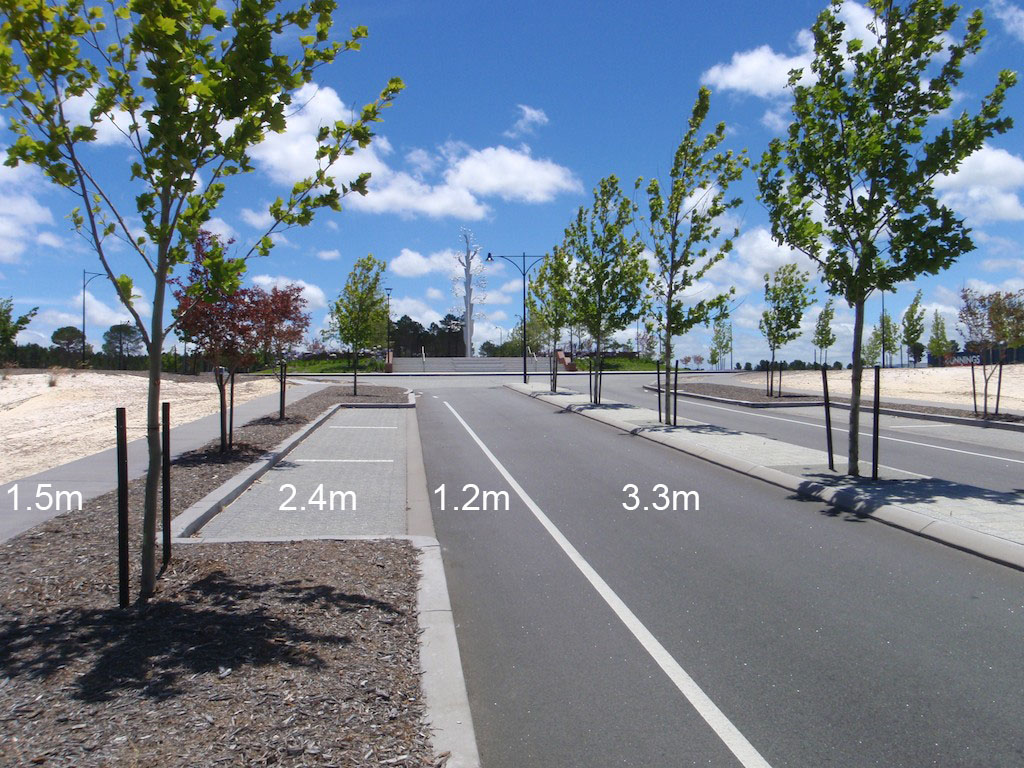 I expect the developers and local council will be congratulating themselves for building something that ticks-all-the-boxes and will look beautiful as well. The bicycle lane box has been ticked. There are footpaths on both sides of the street and lots of trees that will eventually form a canopy.

There is already a park at the end of the street with expensive landscaping and art pieces. 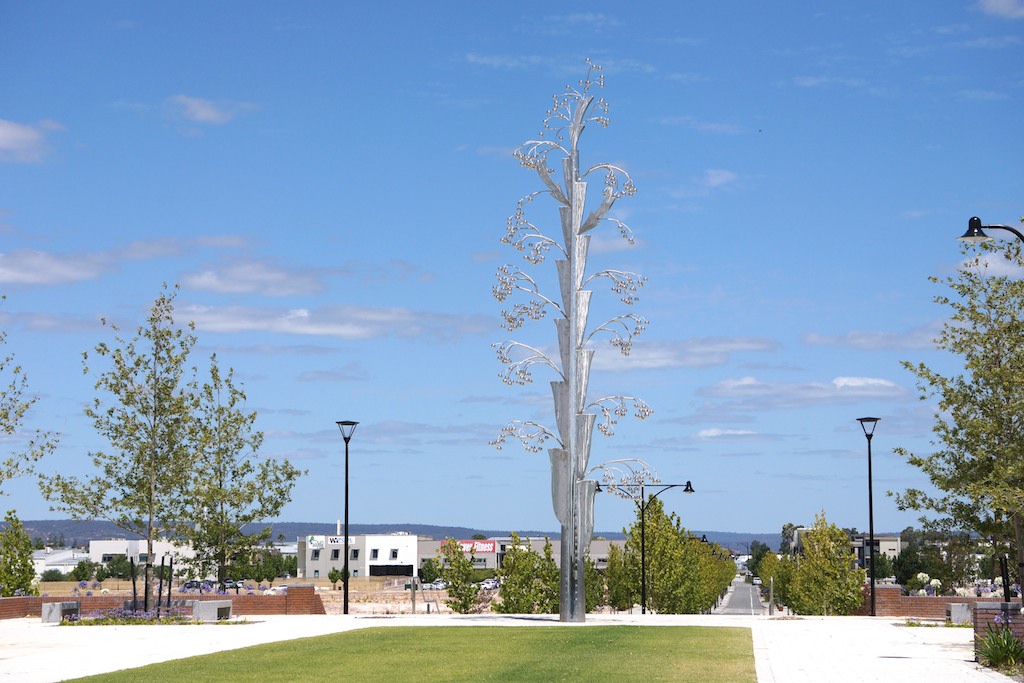 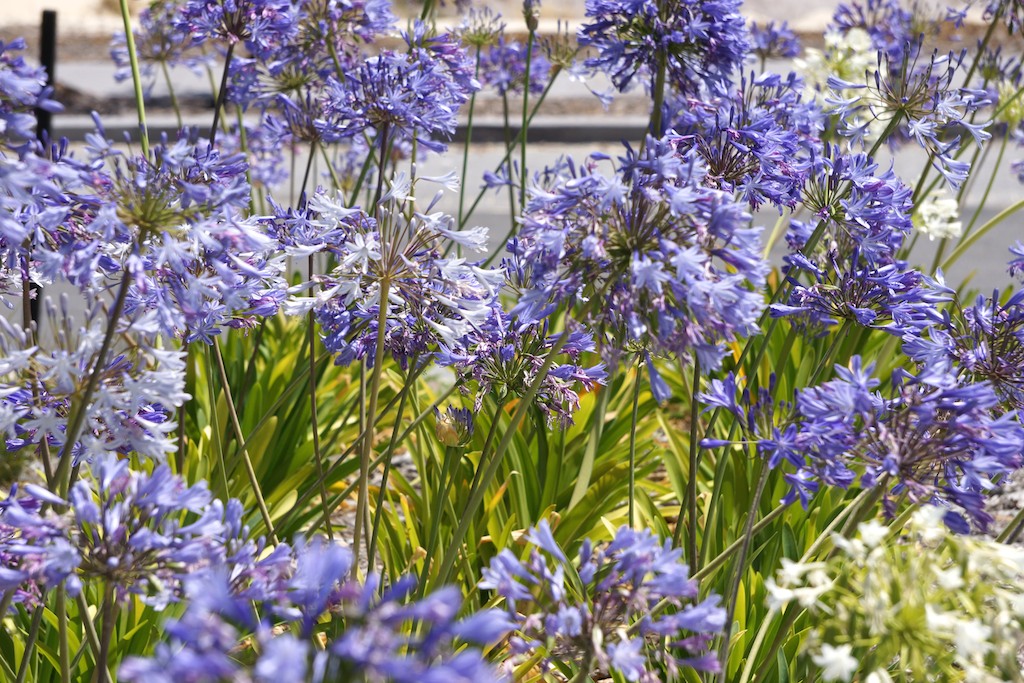 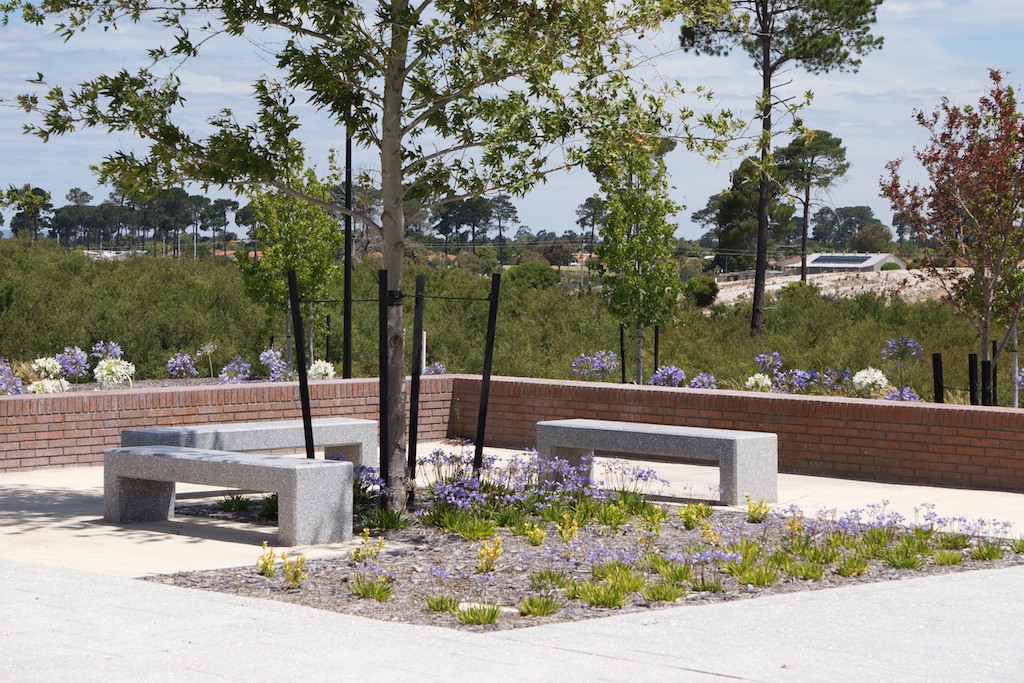 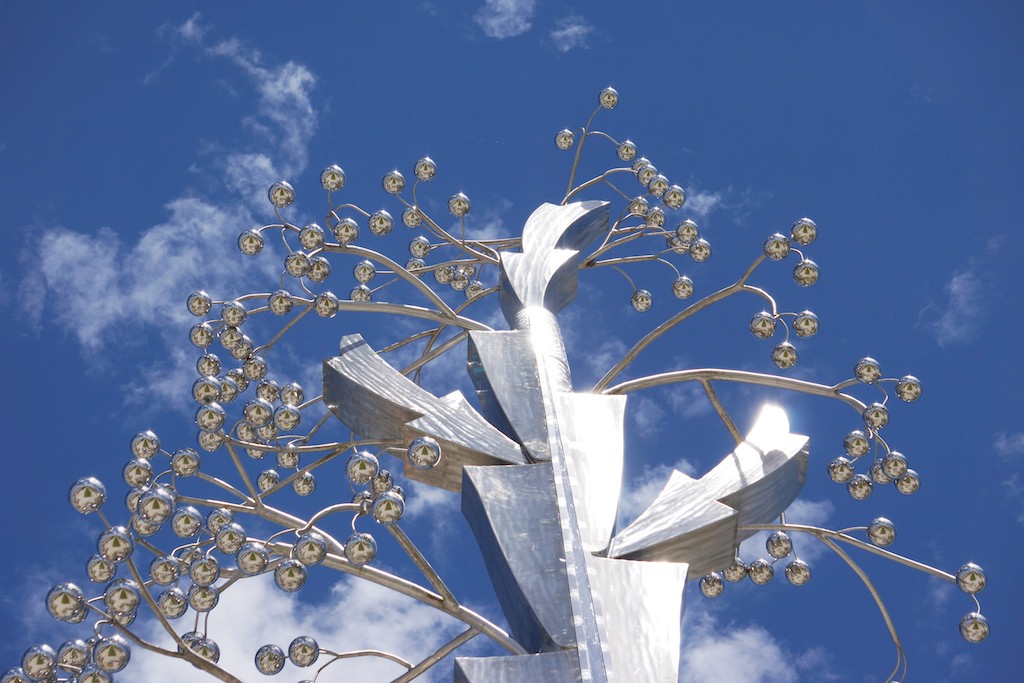 Unfortunately a lot of attention has been given to beauty and not function. The bicycle lane will be OK for the small percentage of people riding bicycles now but it is not good enough to encourage any new people to ride for transport.

This street has been built with Australia's prevailing two-mode system instead of three. There was an obvious opportunity to provide a separated bicycle track away from motor vehicles. The community could have had paths two-metres wide on each side of the street, between the car parking and the footpath. Instead, the developers have constructed an unprotected 1.2 metre wide bicycle lane in the door zone on a 50 km/h street. 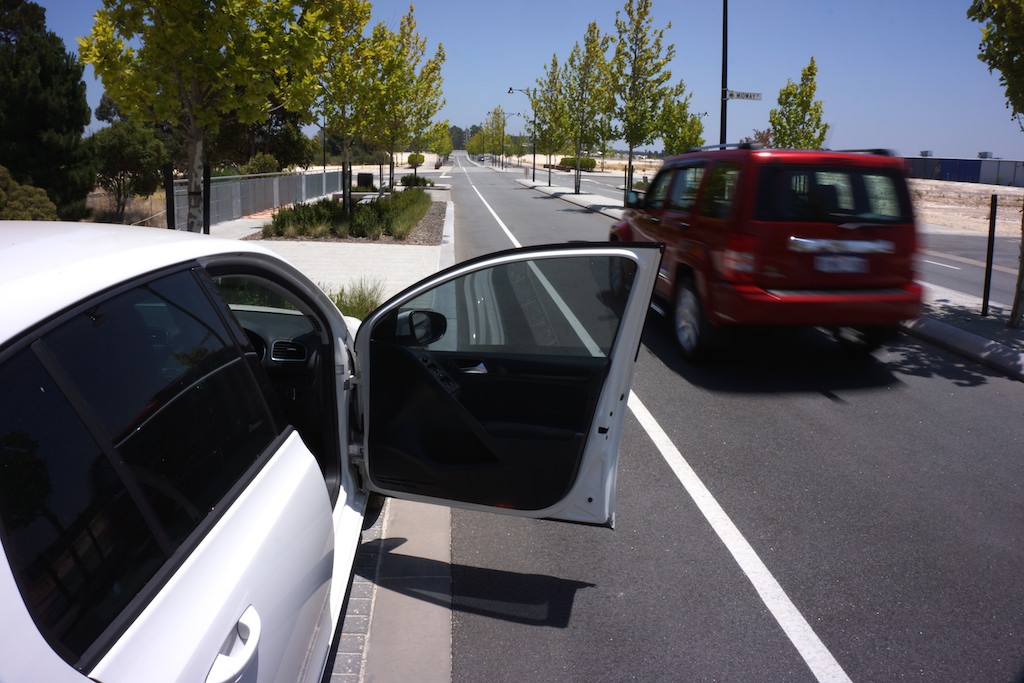 There is also a continuous median strip that will prevent drivers giving people on bicycles any extra room when they pass. This median is a good safety measure for drivers. It eliminates the risk of a head on collision between motor vehicles but it also increases the risk to people on bicycles. The gap between motor vehicles and bicycles will vary depending on the width of the vehicle. If a truck with a low body is passing, the best we can hope for is a gap of around 700 mm. Any truck with a high body will need to be kept away from the trees in the centre which results in the truck drivers needing to use part of the bicycle lane and that 700mm gets reduced to nothing. 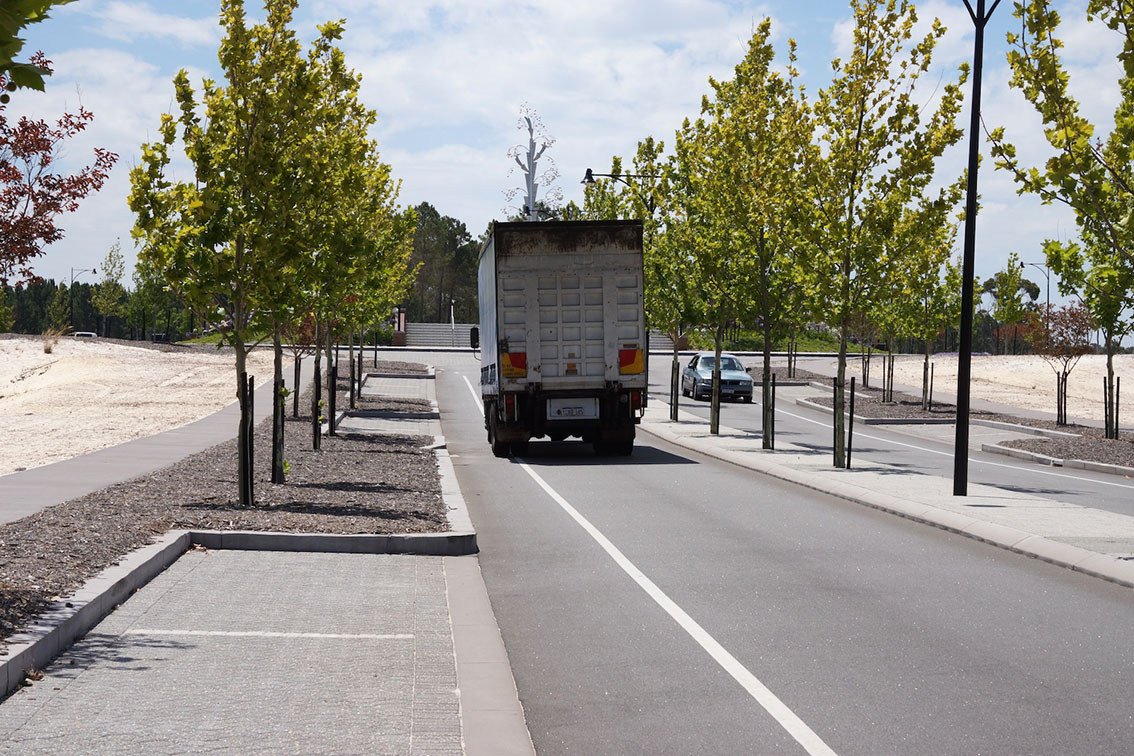 When a carriageway is wide there is a tendency for motorists to drive fast. The speed limit for this street is 50 km/h yet the width between kerbs on this street is 4.5 metres. That's the sort of traffic lane you will find on a 110 km/h outback highway. In theory, the 4.5 metres is divided into 1.2 for bicycles and 3.3 for motor vehicles but in practice this does not work. It is only paint, and everybody knows it.

Without any physical separation of lanes, the drivers of large trucks will protect their vehicles and move into the bicycle lane. Most car drivers will travel in a more central 'default' position between the kerbs if they do not see a person on a bicycle. You can see proof in the photograph below showing the line of oil drips from vehicles that has already formed. This line is not in the centre of the motor vehicle lane, it is further to the left showing how drivers travel closer to the bicycle lane. 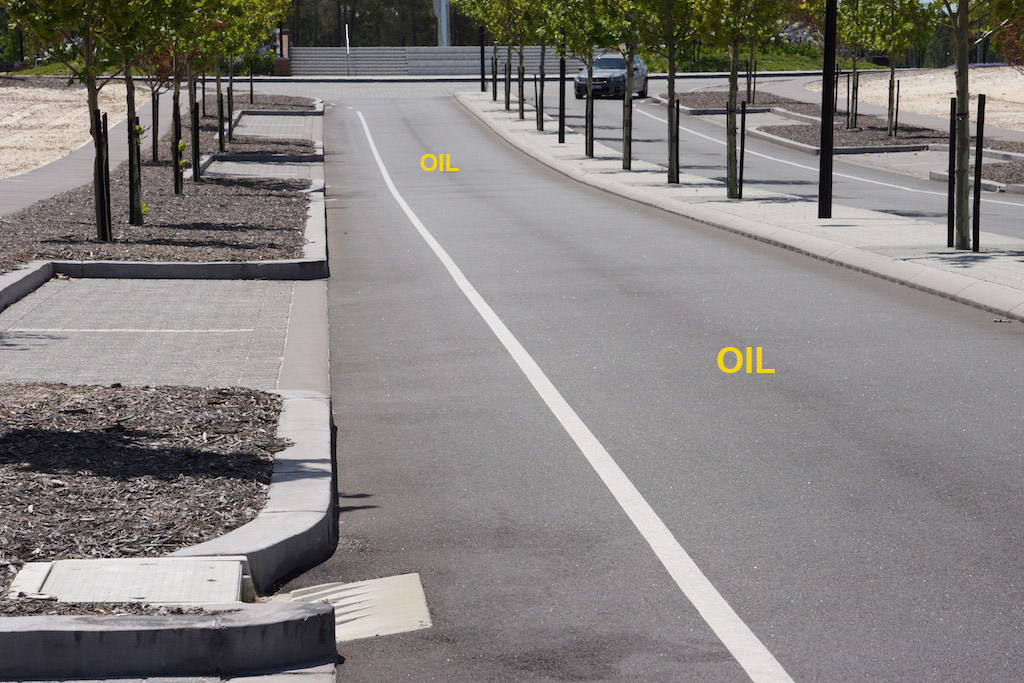 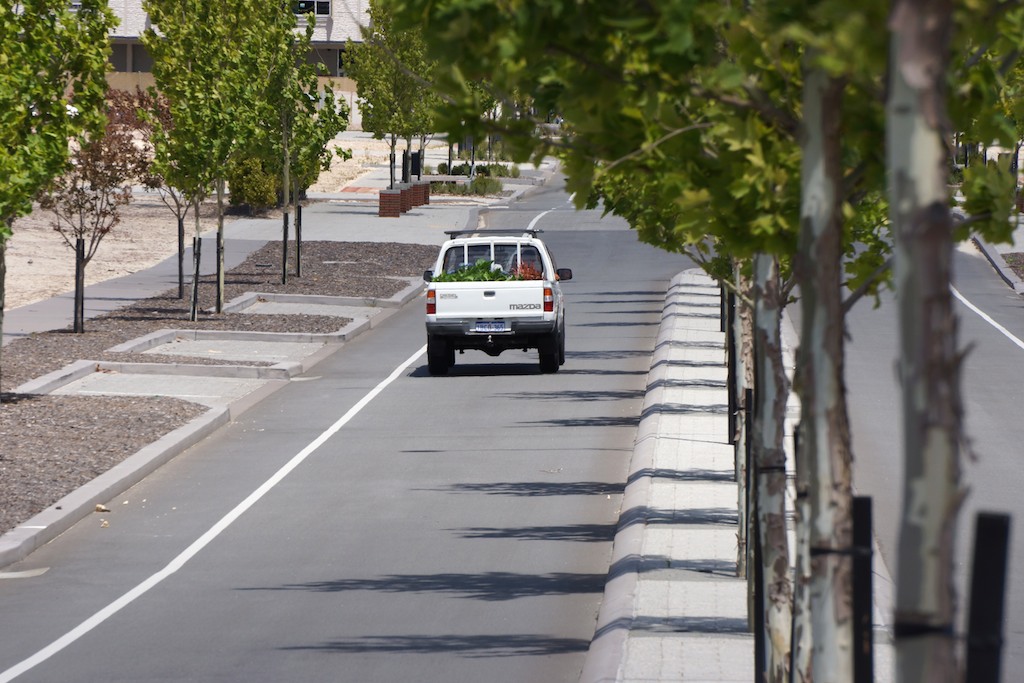 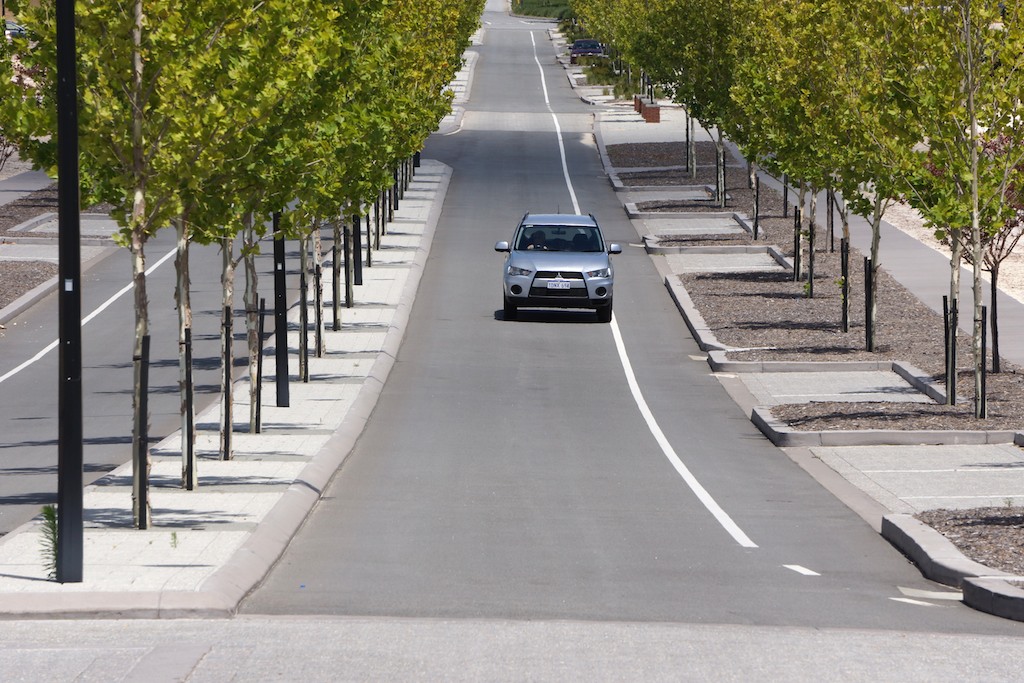 It is also annoying to see sharp and high kerbs confining the bicycle lane particularly when there is a much more forgiving angled semi-mountable kerb on the median. With a height of 130mm this kerb is a hazard to be avoided. To state the obvious for the benefit of any non-riders, if you hit this kerb with your pedal there is a good chance you will be sent tumbling sideways onto the road. This design effectively narrows the width of the lane. Most experienced bicycle riders will wisely position themselves away from the hazard, as illustrated below. 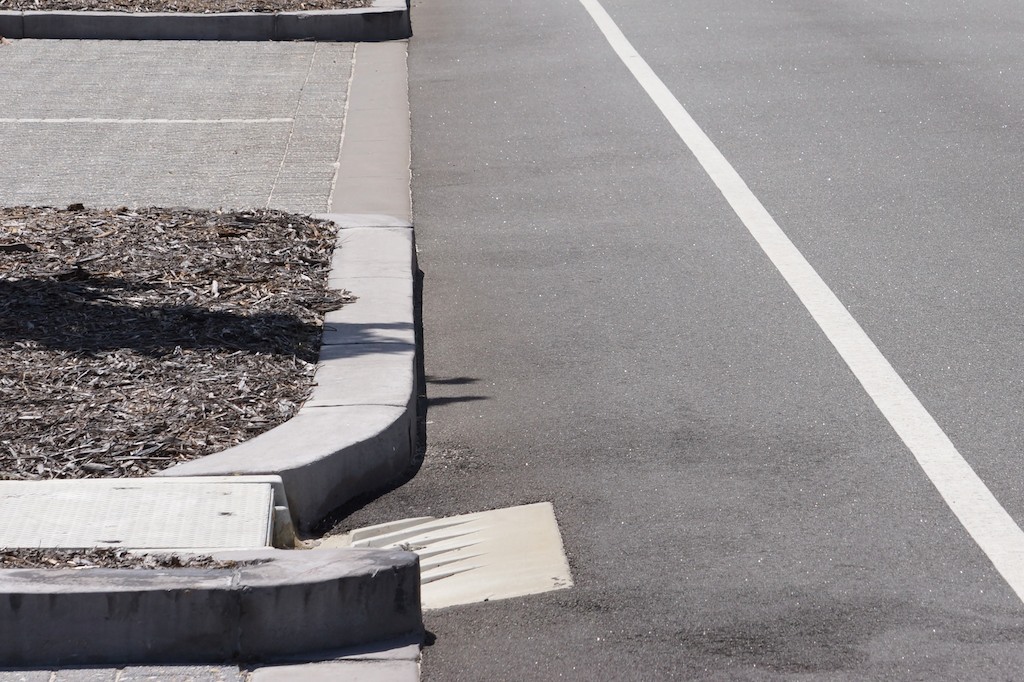 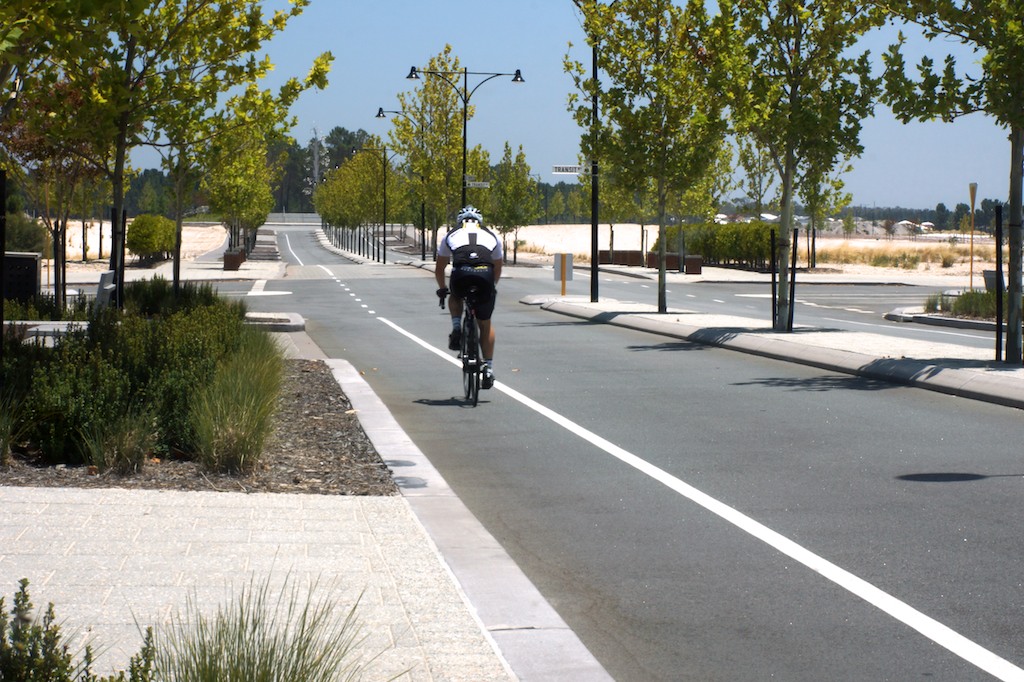 In summary, this is a street design that requires bicycle riders to move to the right, away from the car doors and the high sharp kerb. Car drivers, encouraged by the width, will probably be travelling faster than 50 km/h with their cars very close to the bicycle lane. Large trucks will be travelling in the bicycle lane.

Of course, if they see a person on a bicycle, the truck drivers can slow down and not attempt to pass. The car drivers also have plenty of room to move over to the right where they belong but this only works if the drivers are all paying attention. If they do not notice the person on the bicycle they are on a collision course. 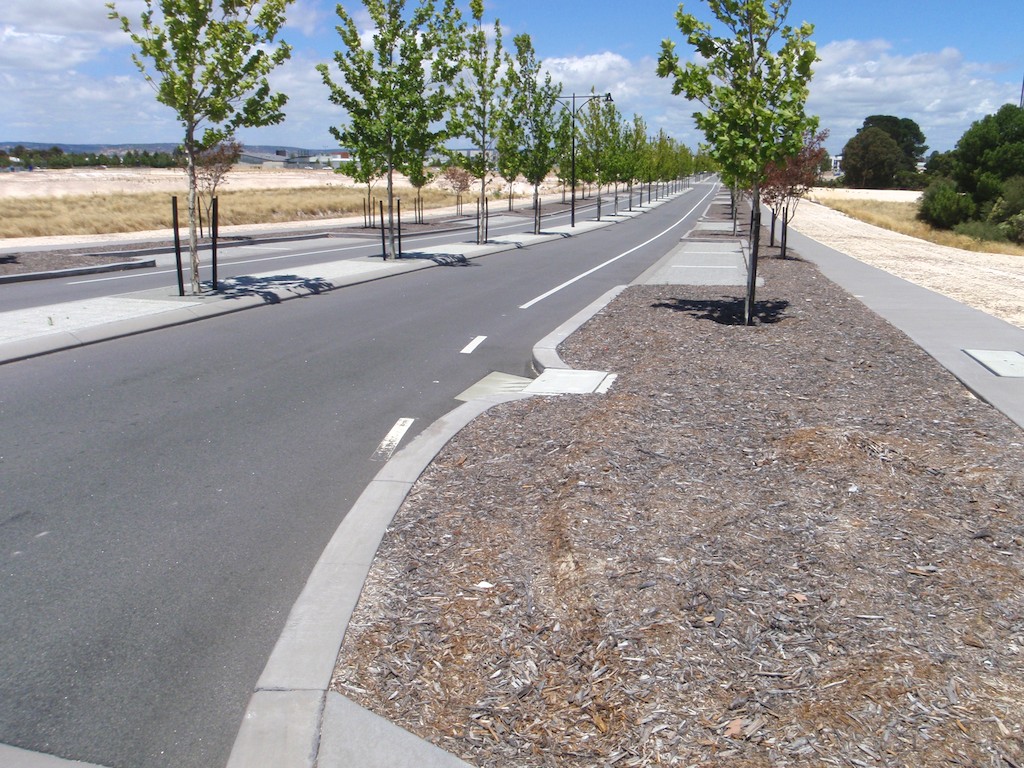 In the early 1990s Ellenbrook was all rural land. The whole community is quite new. During the past twenty years it has been growing and the developers have been trying to create a walkable, and perhaps bike-able, community but it is not working. Even though Ellenbrook has won multiple awards for planing and development it is still dominated by car travel.

Ninety-four percent of people use a car to travel to work, only 5% use public transport. If there are any people riding a bicycle to work they would be a fraction of the remaining 1%.

Ellenbrook is 27 km from Perth's city centre and around 17 km from the closest major work centres of Midland and Malaga. Within the Ellenbrook development there are seven villages, according to Roberts Day Pty Ltd "each neighbourhood has its own centre that can be reached on foot within a maximum of 10 minutes from any home".

From what I can see, most people are also using a car for all their local trips as well. The busiest place is the local shopping centre, the car park is full most of the time and there are very few people arriving on foot or by bicycle. 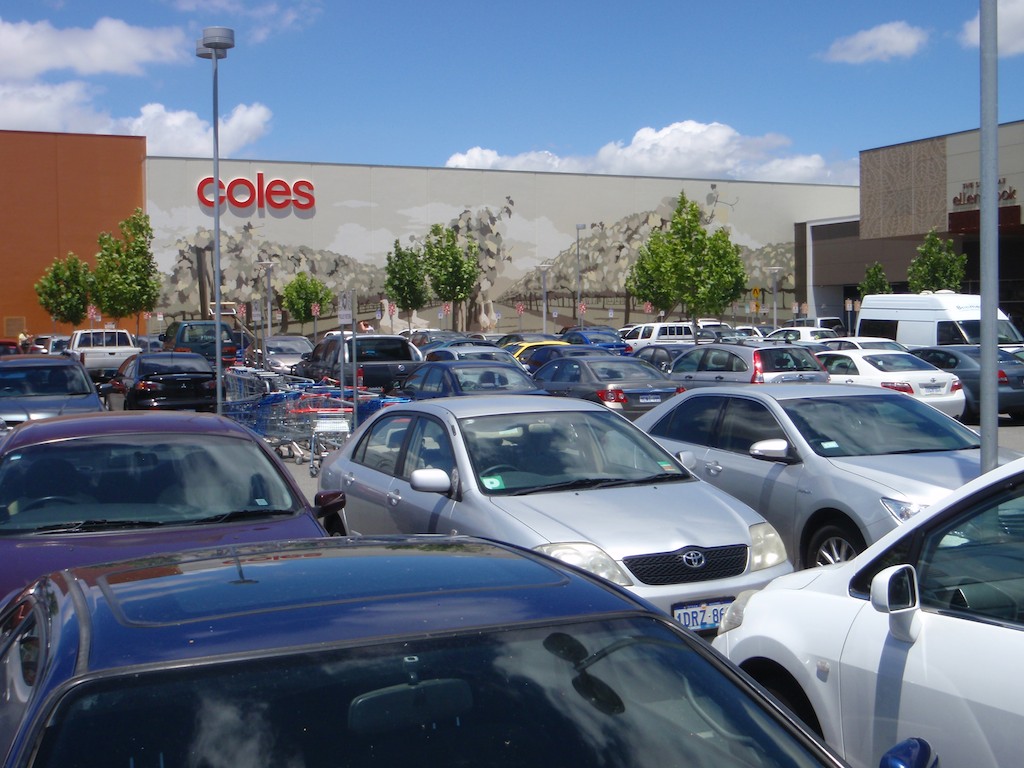 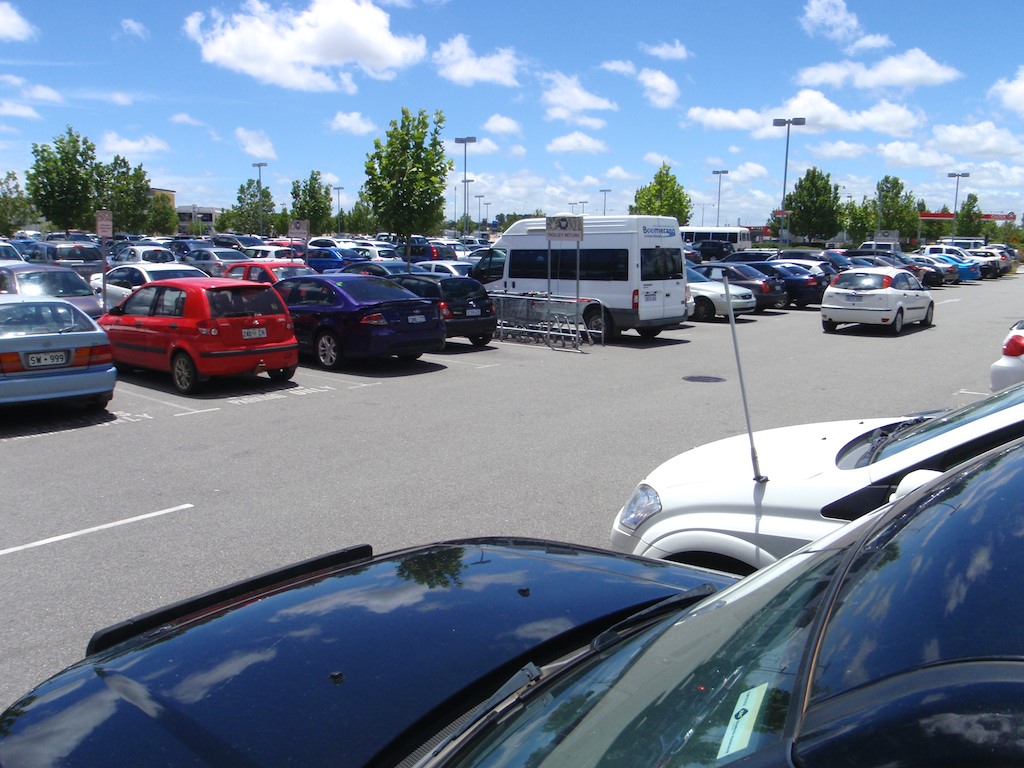 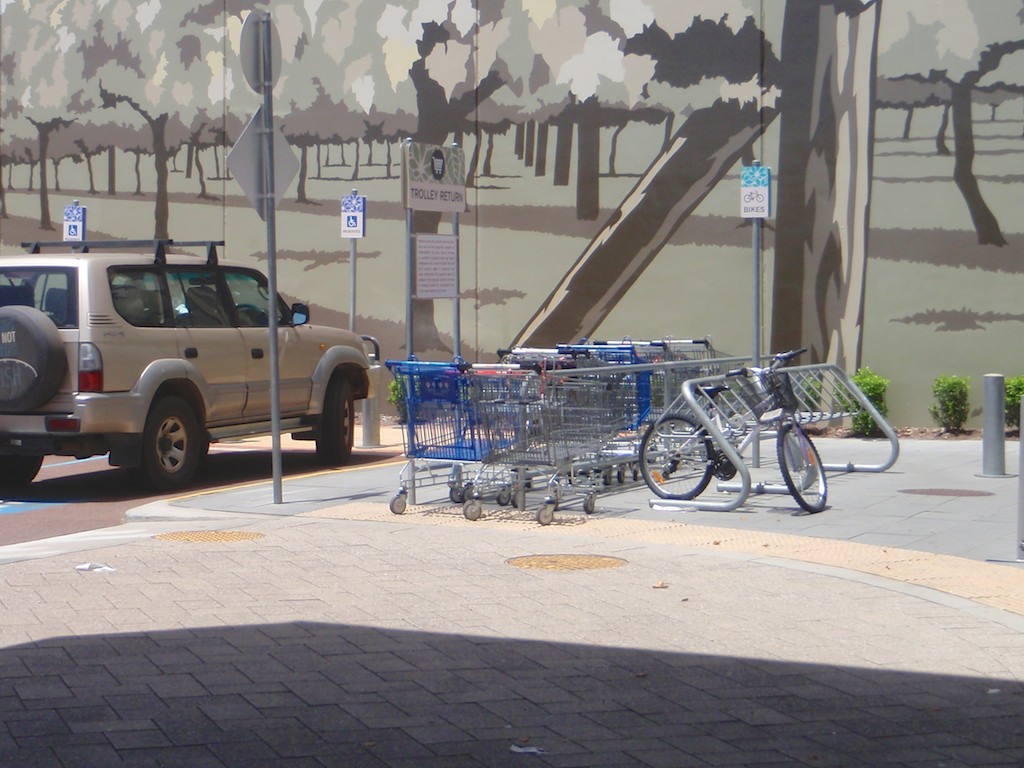 The City of Swan, Ellenbrook's local government, recently commissioned research from the community which was published as Ellenbrook Place Plan 2010-2013 (3.7MB pdf). The 'transport' section has some typical requests from residents: a 'Park and Ride' facility so they can drive to the local bus terminal from their homes, a high-frequency bus to loop around the villages, plus a school bus service. There were also complaints about car traffic congestion around the schools. Further evidence this is not a community that's walking or riding bicycles.

The researchers received no requests for protected bicycle lanes. Not surprising really, the average person has no knowledge of such things. When they see freshly painted bicycle lanes around town and all the fancy paving, garden beds and street furniture, they will arrive at the conclusion their community has good streets. Ask the same people if they let their child ride a bike to school and the response will be "Oh no...it's not safe!". The superficial beauty hides the reality of mediocre transport planning. 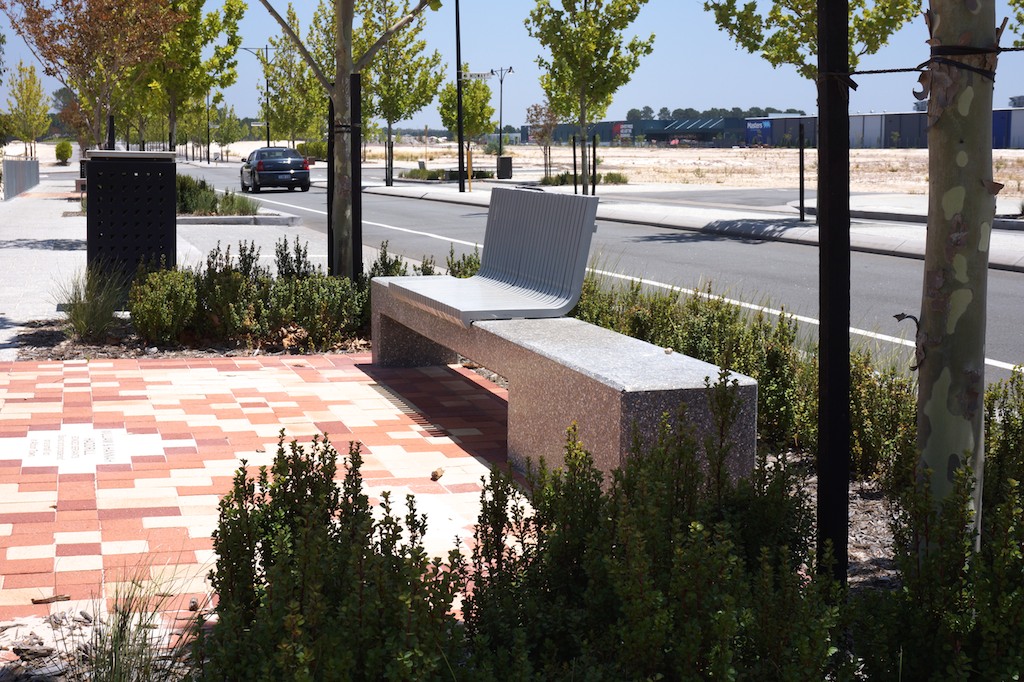 One of the biggest obstacles to progress of bicycle transport in Australia is there are no really good examples of whole districts with good infrastructure. We have the odd bit of protected bicycle lane here and there. There are a few good bicycle tracks running beside train lines and rivers but there is no example of a community with a good network of connected, safe paths that allow all people to get to where they want to go.

If we had a whole community, perhaps 20,000+ people, with good bicycle infrastructure it could be used as a reference for measuring the shift back to bicycle use. Engineers from other local government areas could visit to see 'how it's done'. Word would get out and eventually the general public would start to envy the people who live in that place where children can get to school by themselves and parents are not 'taxi drivers'.

Greenfield developments need to 'raise the bar' and provide separated bicycle paths. The standards for Perth's streets that were developed in the mid-1990s are out of date. It's now 2015, the world's moved on. Our aspirations have gone beyond bicycle lanes in door-zones.

At Ellenbrook and any other new developments around Australia, there should be no excuse for continuing to build streets that function badly for some users. It does not require any additional money or time but it will require a change in thinking. 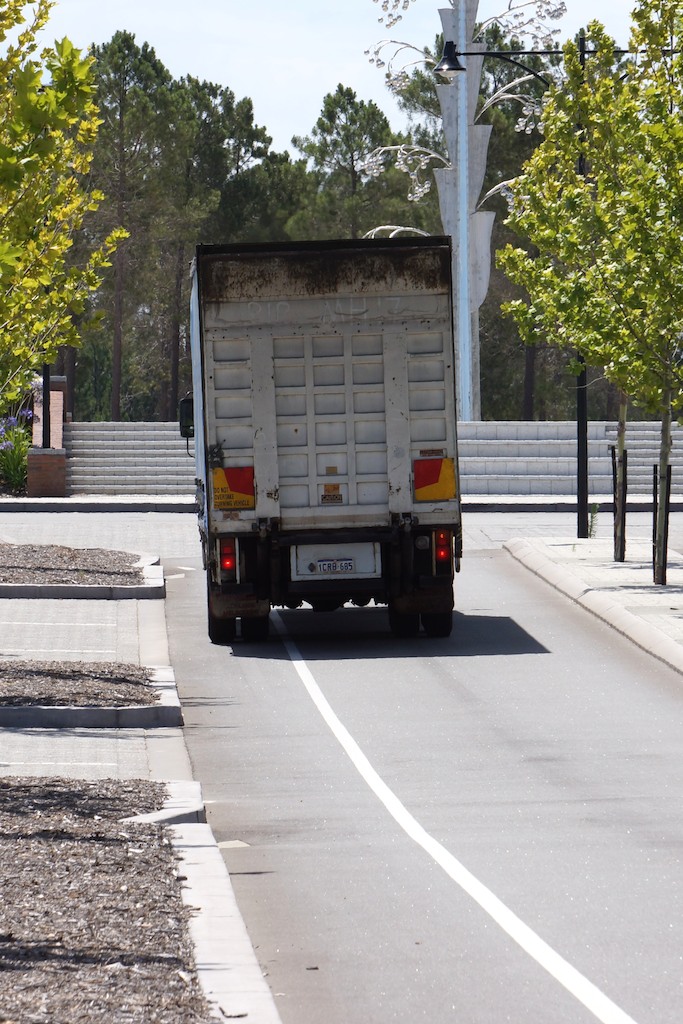