Here is a simple example of filtered permeability in Little Grove, Albany. These children are riding home from school on a residential street that has a very low volume of car traffic.  King George Street is a cul-de-sac for motor vehicles. There is no reason to drive on this street unless you are a resident or visiting. 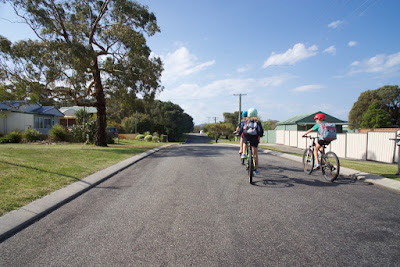 However, if you're on a bike or walking it is not a dead-end. There are connecting paths that enable access to Bay View Drive to the north and Little Grove Primary School to the south. 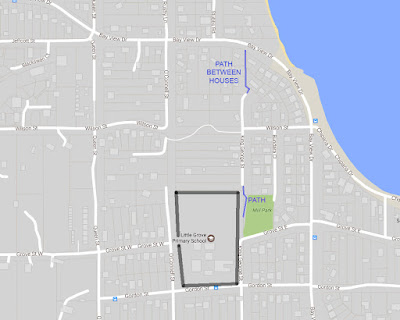 These paths are obviously not a new idea. They would have been incorporated into the design of the suburban sub-division and the age of the concrete indicates they have been in place for a while. The southern path can be seen connecting to the cul-de-sac in the photograph below. 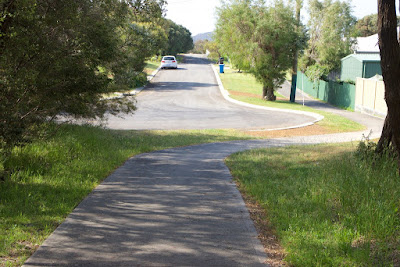 The path at the northern end is difficult to find and unusual. The first part doubles as a residential driveway. 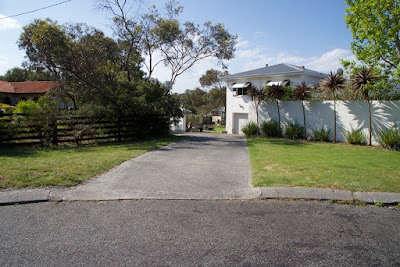 The entry to the rest of the path is hidden by bushes on the left. 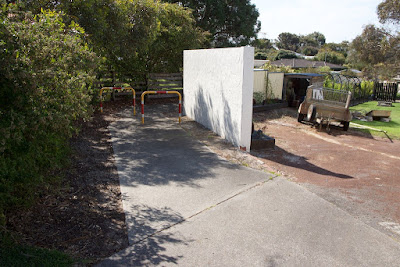 Once you get past the two unfriendly barriers it continues along the side of the house. 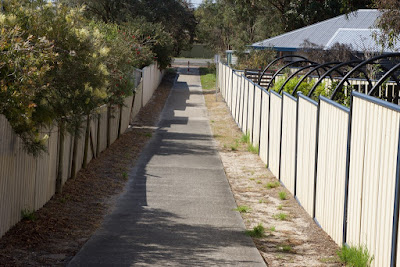 It then joins as a T-junction with Bay View Drive at the northern end. 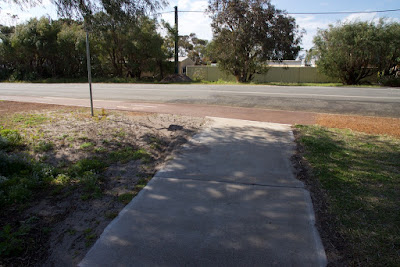 This part of Bay View Drive has a relatively new shared path. The City of Albany seems to have recognised King George Street is a safe and useful route and are gradually improving the network with new infrastructure. 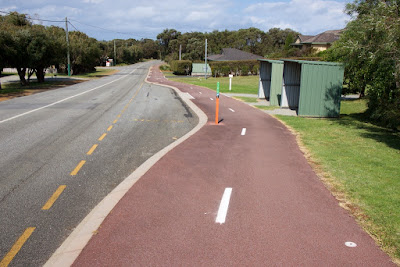 King George Street and these connecting paths were probably built in the 1970s or 80s. It was a time in Western Australia when cul-de-sacs became very popular. When built with a full closure for all modes, they encourage car use because of the distance to reach a destination. In other words: they're the worst. But, if they are built so that cars are stopped and people on bikes or walking can still get through: they're great. We have some examples of this better cul-de-sac design in suburban Western Australia. King George Street is one of them. This could be called a Bicycle Boulevard. 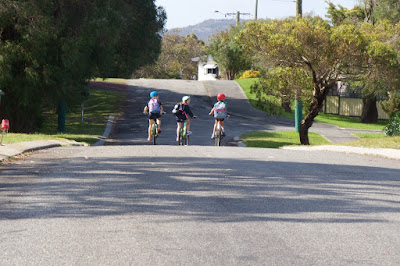 Filtered permeability is an important aspect missing from Western Australia's current Bicycle Boulevard program, now known as Safe Active Streets. The program is being implemented in three suburban areas all with a grid system of streets from the 1920-1950 period. Pinch-points are being used with the intention of reducing motor vehicle speeds and volume. The problem with pinch-points is they are always a disincentive for people on bikes and in the worst cases become dangerous. Retro-fitting cul-de-sacs to the residential grids, although politically a more difficult task, would create a much better end result for the Bicycle Boulevards. Rat-running would be prevented, short street lengths would help restrict motor vehicle speeds and there would be no need for pinch-points or speed bumps.