Shakespeare Street Before and After

Shakespeare Street in Mount Hawthorn was chosen as the first street in Western Australia to have a makeover to become a Bicycle Boulevard. It is part of the Department of Transport's Safe Active Streets program. The aim of the program is to "explore innovative options to provide a safe cycling network for people of all ages in Perth and regional towns".

The inspiration for the Bicycle Boulevards was a result of the Cycling Imagineering Workshop held in Perth with two Dutch planning and design experts in 2015. Now, after two years, the first example has been completed and some early data will be available soon. Does it work? Do people feel safer and has it attracted riders with a broad age range? Does it match Dutch best-practice or were things lost in translation?

Here is how it looks, starting at the southern end:


The Department of Transport website states "Bicycle boulevards are a type of on-road cycleway where speed limits are reduced and cyclists are given right of way". This is reinforced elsewhere as "cars must give way to bike riders". If there are any special variations to the road rules relating to the relationship between motorists and bike riders when using this street, it is not clear at the entry. The blue sign is a new element but at this stage it seems like a 'feel good' branding tool and not an official notification to drivers.

Bicycle symbols have been added and there are additional 30 km/h speed signs on the street surface.

A brick paved band has been added as well as a very unusual yellow honeycomb pattern across the pedestrian desire line.

There is a wider section of Shakespeare Street near commercial buildings that has car parking on both sides. The width has remained the same but the car parking spaces are now clearly defined.

Small garden beds with a paving effect have been added to the street and yellow "no standing" road marking has been added beside the kerb.

It is interesting to note the behaviour of people parking in the 'before' situation. Often the cars would be parked on the street verge (or nature strip) even though there were no parking restrictions on the street.

At five locations along the one kilometre street, one-way slow points have been created. These narrow pinch-points are 3.2 metres wide, using triangular concrete beds with a brick pattern. These concrete beds are 25mm high, plus there is additional height via the inclusion of bollards and vegetation. Speeds of 50 km/h through these pinch-points are easily possible with a normal mid-size car.

Four-wheel-drive vehicles and trucks, with larger diameter wheels, can drive across the edge of the raised concrete and maintain a fairly straight line through the pinch-point with very little reduction in speed. This is illustrated by the tyre marks on the concrete edge after a few weeks, as shown in the photograph below.

The concrete triangles are set away from the kerb at various distances from 340 - 600mm. This must be for drainage because the red bitumen does not continue through that area. They are quite narrow, but an experienced rider could possibly use these drains to avoid motor vehicles in the pinch-point, providing there were no parked cars in the way.

Does the white van owner now feel it is safer to park the van fully on the street?

Further north, Shakespeare Street crosses the second of three streets. At Woodstock Street the treatment of the intersection is similar to Hobart Street, however the priority has not been changed and there is still a "stop" sign.

The 403 bus travels along Woodstock and the route has not been altered.

Although a right turn is not permitted for motor vehicles, it is still physically possible with a slight deviation. The gaps in this median are a curious arrangement.

A kilometre away at the southern end, Shakespeare Street connects with Scarborough Beach Road which has had a reasonable semi-protected bicycle lane for the past couple of years. At this intersection Shakespeare has been given a similar treatment of a slightly raised street level and yellow honeycomb markings for pedestrians.

In a few days Shakespeare Street will feature as a study subject at the Safe Active Streets National Workshop in Perth. There will be more than 140 people learning about why this street was selected, what was done, and hopefully, the latest data showing some measure of success since the work has been implemented.

In the meantime, I'll go out on a limb. I think it will fail if kept in its current form. The reasons:

1. The pinch-points are not suitable for bicycle riders of all ages and skill levels. Would you let your eight year-old child roam around on that street?  Even an adult riding along the street would feel compelled to check behind for vehicles at each pinch-point: five times in just one kilometre. That is not pleasant riding, that is being on-guard.

One of the pinch-points is also just before a bend and will put any bike traffic in line with an approaching car. This would be less of a problem if the residents did not park cars on the street verge and obscure the sight lines, but they do. This corner was safer in its original form.

The area has a grid system of streets and an additional grid system of rear lanes. It is highly permeable for a motor vehicle. Approximately two-thirds of the houses on Shakespeare Street have four access points via car. That is four ways to reach each individual house (front and rear, from north and south).

3. It still has three intersections. The priority has been changed to favour Shakespeare Street at two of them, but that minor improvement will not dramatically change behaviour and the perception of safety. I also suspect Ellesmere Street is a rat-run. It is a direct route between Scarborough Beach Road and London Street. At the intersection with Shakespeare there is only a "give way" sign; why not a "stop" sign? Better still, make Ellesmere Street a cul-de-sac!

It seems that Ellesmere Street is a "Local Distributor" in Perth's Metropolitan Functional Road Hierarchy (MFRH) and can carry up to 6000 vehicles per day. The City of Vincent have been getting a few complaints about speeding on Ellesmere Street. The clipping below is from Council Briefing 16 August 2016. It will be interesting to learn how the City of Vincent and Main Roads WA are dealing with a Bicycle Boulevard crossing a Local Distributer at the workshop this week. 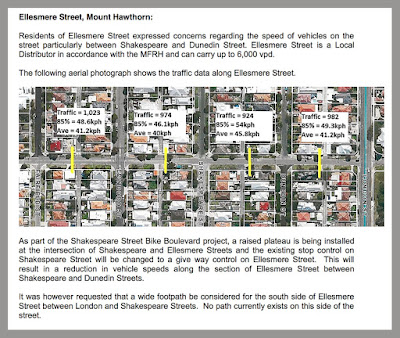 4. The actual vehicle speeds in Shakespeare Street will not be at 30 km/h or slower. I could be proved wrong about this very easily because I know there has been speed monitoring devices placed in the street, but I also know the pinch-points can be negotiated at 50 km/h in a car. Once people are familiar with the pinch-points in the street, the motor vehicle speeds will increase.

It also does not help that the three streets crossing over the Bicycle Boulevard still have a limit of 50 km/h (Hobart, Woodstock and Ellesmere).

5. There is a bus route crossing through the Bicycle Boulevard. Obviously kids on bikes, and buses are not a good combination. It didn't bother us so much in the 1970s but we've moved on. We now expect a higher level of safety for everyone. Perth's buses accelerate fast and Woodstock Street is a downhill run when heading east. One option would be to filter and allow buses only at low speed with an automated bollard similar to the Dutch example in the photo below.

Another option is to adjust the route and have the 403 buses continue on Edinboro Street for two blocks. This seems easy change to me. The 404 is already covering London Street, the frequency of buses would be reduced on London, but only for two blocks. The buses would be closer for the people on the western side of Shakespeare. As they say, it's swings-and-roundabouts, from a bus service point of view, but it would be a huge gain for the Bike Boulevard if it was combined with some sort of motor vehicle filtering on Woodstock Street.

6. The street is used for car storage.  This is not a big issue compared to the earlier factors, but I have not noticed any change in behaviour of the residents. The people in the street predominately use the front of their houses for car access even though approximately two-thirds have rear lanes. The street verges are used like private property; many residents have brick-paved parking spaces in front of their houses. The haphazard nature of the parking arrangements, particularly at weekends, creates problems with sight-lines, makes the street less inviting and reduces safety for children. The sense of ownership the residents have over the public space in the street could be turned into a positive, if they can be encouraged to store cars at the rear of the properties and use the street area for recreation. 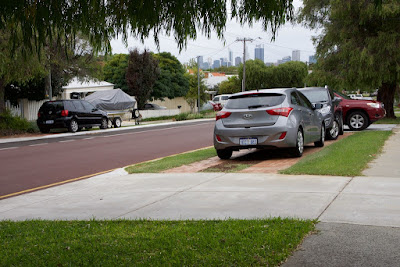 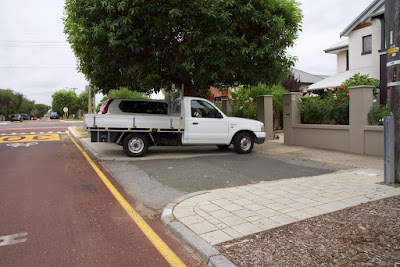 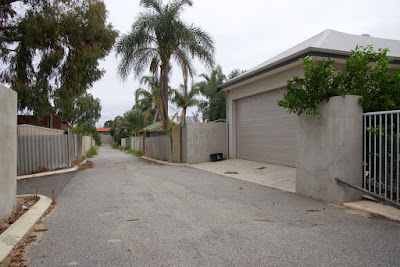 The Safe Active Streets program will be a progression of learning. I have already noticed some of the design problems in Shakespeare Street have been adjusted at the second bike boulevard project which is currently under construction in Bayswater. The Western Australian Department of Transport are taking an open-minded approach to the improvements to our street network for bike riders and have been encouraging feedback. The national workshop they have organised is a good example of this. I am looking forward to hearing what everyone else thinks.