The transport plan for the new Perth Stadium was released yesterday (3.1MB PDF).  Bicycles do not get a mention. I am tempted to turn this into a rant but I will try to contain myself. 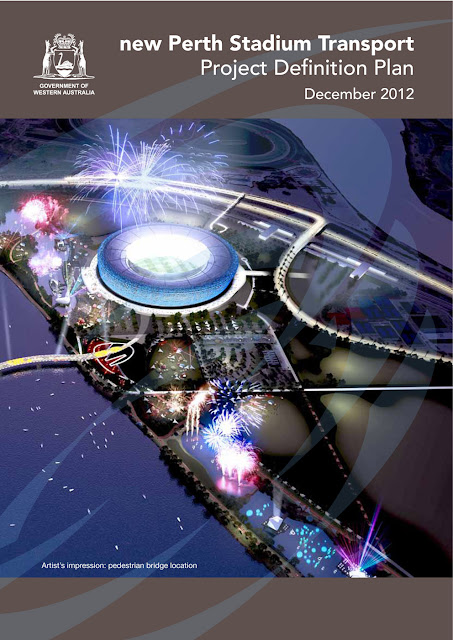 The alternative title could have been How to move 60,000 people in a short space of time and ignore the world’s most efficient transport device.

I have written about the stadium in an earlier blog post. At that time I also sent an email directly to the Perth Stadium people via their website. I asked them to explain what plans were in place to travel to the stadium on a bicycle and if the proposed "pedestrian bridge" would be designed to accommodate bicycles as well.

I received this response:

The Public Transport Authority transport modelling has identified that the number of cyclists on game days as generally low due to the large pedestrian flows. While these figures may be low on game day, the new Perth Stadium will transform the Burswood Peninsula by taking advantage of its riverside views and central location and the improved cycle/pedestrian network opportunities. Linking these improved cycleways will enhance the existing network and will activate the sports precinct on non-game days.

For those patrons who do choose to access the Stadium on event days on bicycle, consideration will be given during the stadium and precinct design process to select a suitable location for bicycle parking and end of trip facilities in proximity to the Stadium which minimises conflict with other modes of transport and high volume pedestrian areas.

The full extent of these improvements will be determined through the Transport Project Definition Plan due for completion by late 2012. The Transport Project Definition Plan will then be considered by Government and the extent of the work will be confirmed in early 2013. This includes the form of the pedestrian bridge, and whether cyclists will have access on both event and non-event days.


The Transport Project Definition Plan was delivered on time but it does not contain any of the promised information relating to bicycle transport. They seem to have decided that incorporating bicycles was too hard because there will be so many pedestrians, and not many people ride bicycles anyway.

The statement about the Pubic Transport Authority modelling identifying a low number of cyclists would be true, if there are no paths for us to ride on. The task here is to provide the infrastructure to solve the transport problem. They need to do the work and design separated infrastructure which will enable bicycles to become part of the solution.

The Burswood peninsula site for the stadium has limited motor vehicle access. Only 1000 car parking bays are planned. The area already has some cycle paths, it is absurd not to include planning for bicycles.

I suspect that once people think about the options of crowded trains and buses, or paying for parking on the city side of the river, quite a few of the rarely used bikes will be dragged out of the garage and dusted off. There is huge latent potential for bicycles to be used to get to the stadium. 61% of all households in Western Australia have at least one working bicycle. When surveyed in 2011, 22% of Perth people had ridden in the past seven days (Australian Cycling Participation report) but many people will only ride on separated paths where they feel safe. 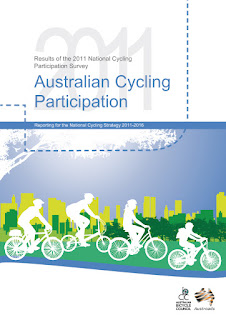 Other stadiums seem to be able to cope with the idea of pedestrians and bicycle riders going to the same event. The Allianz Arena in Munich opened in 2005 and has a seating capacity of 71,135. On their website they offer several transport options, bicycles are included. There is a 10 km illuminated cycle path from the city centre to the stadium.

San Francisco's new Santa Clara Stadium will have a capacity of 68,500 seats, which is also comparable to Perth Stadium. Even though they have transport options of both light and heavy rail, good road access and 21,000 car parking spaces a short walk away, they are still proud to be providing convenient bicycle parking.

Closer to home, AAMI Park in Melbourne also accepts that bicycles are normal. On their website they state: "we do encourage this mode of transport".

How about the same for Perth?

Email ThisBlogThis!Share to TwitterShare to FacebookShare to Pinterest
Labels: Stadium