The crazy paths of Amberton 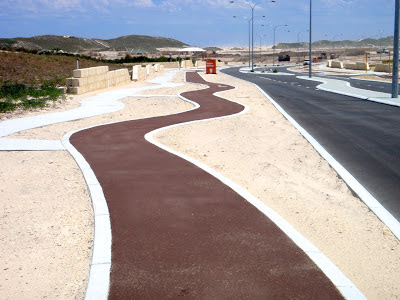 This is not a manipulated image. It is part of a new housing development in Perth. On the left is a footpath, in the middle a cycle path and on the right is the carriageway for motorised traffic.

What are they thinking?

They must have the idea that riding bicycles and walking are doodling activities. Having no real purpose and no requirement to actually get anywhere. People wandering around looking at clouds.

I have to acknowledge that the principle of having three separated paths as part of the road reserve is commendable. It is such a shame they bungled it by ignoring the basic principal of desire lines. When we walk and cycle, we usually want to get somewhere and we will take the most direct route available.


There should be no excuses for bad design here. This development was a blank canvas. Just low coastal scrub and a few four-wheel-drive vehicle tracks.

While we are battling to retro-fit bicycle infrastructure to the established urban areas and dealing with all of the conflicting requirements of existing land use it is such a shame that new developments get it wrong.

The Amberton designers seem to have a fear of bicycles. At several points there are warning signs to alert people to a possible encounter. No warnings about motor vehicles or pedestrians, just bikes. Completely unnecessary visual pollution. 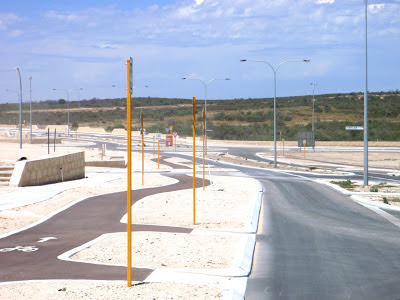 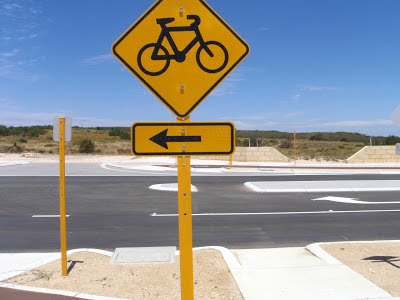 Another interesting aspect is the roundabout on the main entry road. This is a typical Western Australian design that allows for the fast and efficient flow of motor vehicles at the expense of pedestrians and cyclists. 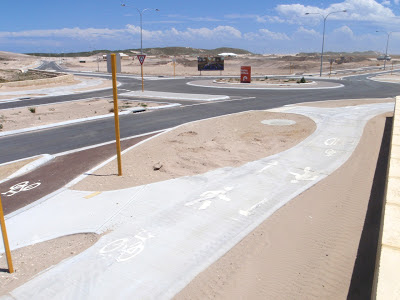 However, this one has the addition of extra ramps that allow bicycle riders to cross onto the road and share with motor vehicles, or to cross onto the footpath which then becomes a "shared path". Confused? Don't worry, there are more signs to tell you what you can do. 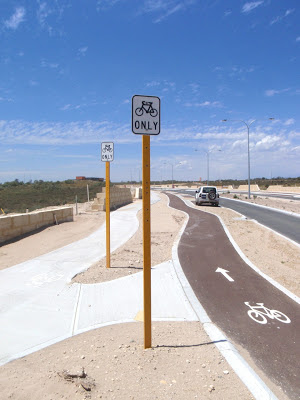 This T-junction (below) also has signs to tell us that the cycle path is ending and that it starts again on the other side of the road. The implication here is that the turning motor vehicles would have priority over the cyclists but it is interesting to note that the pedestrians using the footpath on the left have priority over the motor vehicles. (Main Roads PDF). Are we meant to dismount to get priority? 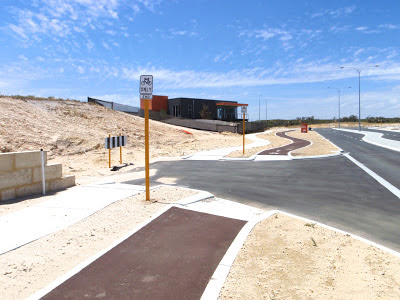 This Utopian three-mode design does not go far. Once you turn off the main entry road your choice is the on-road lane or illegal footpath use. They do go in a straight line, but look at all that space, why not continue the separated paths? 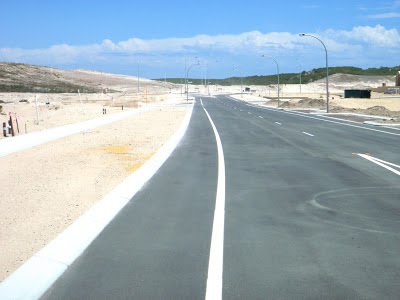 Further on, it is business as usual, a road for motor vehicles, a narrow footpath and car garages on the front of houses. 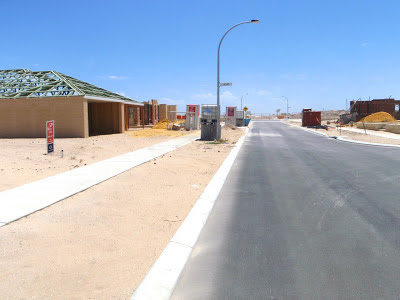 Perth has the fastest growing population of Australia's capital cities. Our population grew by 14.3%  between 2006 and 2011. So much of our city is brand new. We could be making it so much better for bicycle riding and walking.

The Amberton estate will soon be one of the most northern suburbs of Perth, 50 km from the CBD, just south of Yanchep. There are a lot people in Perth who want to be close to the beach.


They hug the coast and don’t want to live in apartments. They want to have a house and a patch of ground that they can call their own. The result is that we have a suburban sprawl of primarily, single residential freehold houses on a strip along the coast that is 140 km long (Yanchep to Dawesville).

I wonder if many of the people living in these outer suburbs ever see the beach during the working week. Their commute is so long, is it dark when they are at home?

You can read a blunt appraisal of our population density and suburban sprawl from the blogger at 6000times.