I have written about the transport issues for the proposed Perth Stadium recently, here and here.

Since that time, I have learnt some news from the Perth Stadium people.  The new bridge between East Perth and Burswood will be ten metres wide and cyclists will be permitted to ride across. There are not any other details available at this stage because the bridge has not yet been designed. At ten metres wide, it seems that pedestrians and cyclists could have there own space and conflict could be avoided. 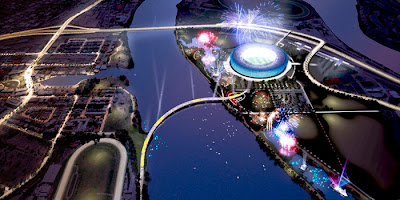 I do wonder about this piece of infrastructure. It will be in quite a prominent position at the eastern end of the city, the part that most visitors see first. There is potential to make this bridge something wonderful. Not only an important link for bicycle riding and walking, but a stimulating and interesting structure that could add to the culture of our city. There is potential to create a bridge that is both functional and artistic.

The movement of people on game days has been the major focus of the Perth Stadium transport plans, but we need to remember that for the rest of the week, any infrastructure built to accommodate those peak times will become part of Perth's transport network. Hopefully, there would be some significant additions to the bicycle network. Unfortunately, apart from the new bridge, the Perth Stadium planners are not showing much interest in bicycles.

The research to date has determined that bicycle use will be insignificant and as such, it has not been included on any publicly-available documents. I know that bicycle use on game days will be a low percentage of modal share but I am not satisfied that the research has been done correctly. It would be good to find out how the research was conducted and a more detailed explanation of the results.

There was a 'walkability' map shown in the Master Plan document last August. It got me thinking about what a 'bikeability' map might look like. There is nothing available from the Perth Stadium planners, so I thought I would do a quick map myself.

My idea was to show the potential catchment area for people who might travel by bicycle to attend the stadium. The area does not show the catchment for seasoned commuters or the enthusiasts, it shows the much smaller area for people who know how to ride but are not confident in traffic. People who have basic skills and prefer to relax and enjoy the ride.

The first step was to decide on the journey time. For this, I took a guess at 45 minutes from home to stadium. That seemed to be a reasonable period of travel for the total journey in comparison with a the various combinations of the alternatives such as 'drive-walk-train-walk'. At an average speed of 15 kilometres per hour, the furthest point from the stadium would have to be within a radius of 10 kilometres.

The various routes to the stadium would have to be on bicycle paths or shared paths that are separated from motorised traffic. I imagined that riders would probably be OK with travelling for approximately one kilometre through quieter suburban streets to reach the paths.


It is interesting once you examine the position of the stadium. There are a number of good paths that already feed into the Burswood area. Most of Perth's best bicycle infrastructure has been built along routes that have been easy to secure. Routes on public land without too many conflicting interests such as railway reserves and following the banks of the Swan River. The stadium site is in a great position to take advantage of this existing infrastructure. You can see examples of these paths in the photographs below.


Here is how the 'bikeability' map looks. I have shown all the existing separated paths that radiate from the stadium site in red. The shaded blue area is the zone that fits all of the criteria. The people who live or work in the blue zone would be able to reach the stadium by bicycle with a 45 minute ride. 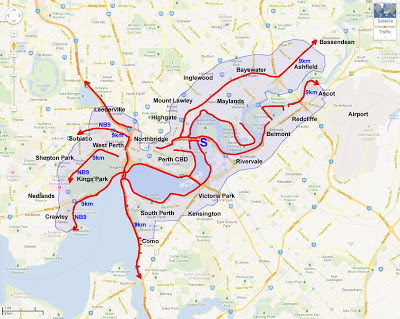 The stadium site is shown with a blue 'S' near the centre of the map. The new bridge will extend the catchment area for bicycle riders in the areas west of the stadium. My rough estimate is the bridge would reduce the distance by one kilometre which will help extend the range of the 45 minute travel zone further into the suburbs of Crawley, Nedlands, Subiaco, Shenton Park and Leederville.

Conversely, if the proposed Elizabeth Quay and Riverside developments restrict the movement of bicycles by severing the paths to the west of stadium, much of the advantage of the new bridge will be lost.

Elizabeth Quay and Riverside are being controlled by the Metropolitan Redevelopment Authority and the Perth Stadium is being handled by the Department of Treasury with the Department of Sport and Recreation. All parts of the Western Australian state government. My question is: are they talking to each other?


The map is based on the following: