I had been thinking about doing a blog post on roundabouts for some time. James D. Schwartz on his blog The Urban Country recently posted about them and his opinion was mostly favourable. Unlike mine.

I am not happy at the thought of having more roundabouts and decided I had better put my opinion forward.

James was writing about Canada where they seem to be relatively new. In Western Australia, we have had them for a long time. I remember roundabouts being used at each end of the Causeway bridges in the early 1970's. 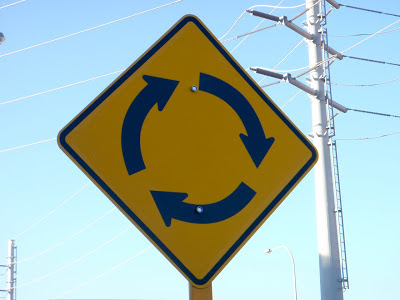 Roundabouts are one of my least preferred traffic calming devices. They have become increasing popular with our road designers and are spreading like a disease throughout Perth.

Why am I against roundabouts? The Urban Country presents a logical argument and backs it up with facts from the website of the Town of Collingwood, Ontario. I do not dispute them, however there is a problem with how roundabouts are designed in Western Australia. The roundabouts shown in Ontario have pedestrian crossings. This is possible in Western Australia but extremely rare. Our roundabouts create conditions that are worse for pedestrians and cyclists.

A few months ago I tried to check this law by telephoning the state government Office of Road Safety. It took some time to get an answer. The person who took my call did not know what the laws were but tried to be helpful and explained that I should not attempt to cross the road near a roundabout. I should walk somewhere else and attempt to cross. As amazing as this sounds, this response was not totally unexpected. The Office of Road Safety is part of the department of Main Roads. Apart from building major infrastructure, one of their major goals is to reduce deaths on the roads to zero. Unfortunately this is often being done at the expense of pedestrian and cyclist amenity. Safety is everything. Sometimes it seems they would prefer there to be no pedestrians or cyclists on the roads. That way, their figures would be a lot better.

The only way for pedestrians to regain this loss of priority is for a crosswalk to be installed. There are hundreds of roundabouts throughout Western Australia. The City of Fremantle is the only local area, that I am aware of, that has provided them.

Bicycle riders also have a difficult time at Western Australian roundabouts. Here is an example of what happens. Even with a good on-road cycle lane, at the point where the road meets a roundabout, the lane  disappears and a dangerous pinch-point is created.

The example below is on Carrington Street in Palmyra. At this location, the bicyclists are meant to ride up onto the footpath where it technically becomes a "shared path". In Western Australia is it illegal for adults to ride on a footpath. The shared path is not a good option on rubbish removal day.

And there is a cafe on the corner which also means bicycle riders would need to weave around the tables and be careful of pedestrians.


Roundabouts increase the travel distance for pedestrians. The designated routes for crossing the road are shifted away from the desire lines. The dropped-kerbs are moved away from the intersection so that people in wheel-chairs or those people with prams have to go off-course. If people travelling this extra distance were rewarded by having priority over motor vehicles it might be worth the detour, but that is not the case with Western Australia's current laws.

Here are two examples in Subiaco that show 'before' and 'after'. The first is Hamersley Road. The red and yellow lines show the pedestrian path. In April 2009, before a roundabout was installed we had a very straight, logical path to cross the road.

Once a roundabout was built at the intersection, the pedestrian crossing paths became much less direct. Also note how the radius of the corners has been changed to allow the vehicles to corner at higher speed.

The second example is Churchill Avenue. The yellow east-west crossing path has not changed a great deal but the red north-south has been moved several metres to the east. You can also see that the radius has been has again been changed for faster vehicle cornering. There is no need to slow down for pedestrians!

Here are photographs of the Churchill Avenue intersection. The majority of younger pedestrians ignore these new paths and cross illegally through the roundabout.  It is only those who need to use the dropped-kerb who travel the extra distance. People such as the elderly or those with babies in prams.


I think Australian road designers and local governments have read the statistics about how roundabouts are efficient and safe for motorists. Also safe for pedestrians and cyclists, if built correctly. The trouble is, the Australia roundabout is usually built in a way that allows for the fast flow of motor vehicles. Pedestrians have no priority and cyclists are pushed into the motor vehicle lane or have to retreat to the footpath with the pedestrians. Our roundabouts are not the same as the rest of the world. There are important issues such as local laws and design elements that need to be considered when comparing their effectiveness.

Roundabouts look a lot different in The Netherlands as you can see below. Three modes of travel, separated, and with priority given to bicycles and pedestrians.

I can't remember where I found this photograph. I don't like to use images without permission, if it is yours and you don't want me to use it, just let me know.

If you want to read more about how roundabouts work in The Netherlands, Bicycle Dutch has lots of examples including this video.