Build it and they will come

Here is how the new Principle Shared Path at Bassendean was looking on Friday. It is not officially open but cyclists have started to use it. More of this please. 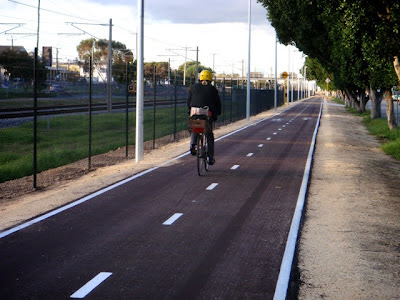 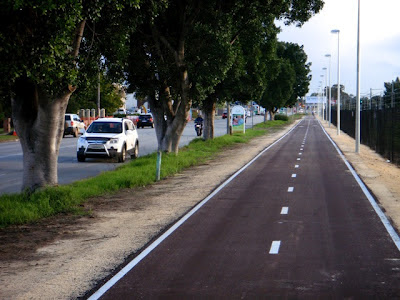 Email ThisBlogThis!Share to TwitterShare to FacebookShare to Pinterest
Labels: Infrastructure

At last, the City of Perth has announced that they are considering a bike share scheme. I think they have been quietly considering it for a long time. They would have been watching the success stories of bike share around the world.

Big cities like Paris and London are the most publicised but there are also very popular systems in smaller cities such as Dublin. In fact, there are over three hundred that have taken up the idea. You can see them all on this map.

Why has Perth waited so long? The reason is obvious to anyone who has seen the poor performance of the Melbourne and Brisbane bike share schemes. Compulsory helmets are a major problem, but hopefully not for too much longer. I think the City of Perth has realised that there is a growing dissatisfaction with the compulsory helmet law in Western Australia and have joined the push for change. In this article from The West Australian newspaper Perth’s Lord Mayor Lisa Scaffidi acknowledges that the law making it compulsory to wear a helmet should be relaxed.

If you look around the streets of Perth there are more and more people who are dressed in normal clothes, riding bicycles for transport and choosing not to wear a helmet. It is very encouraging.

For Perth’s bike share to succeed we not only have to fix the helmet problem we will also need to have some more separated infrastructure and safer ways of getting around town. Lisa Scaffidi's idea of people being able to ride from the new waterfront to Northbridge is excellent but I doubt that she would want to compete with cars in Barrack Street in its current form. 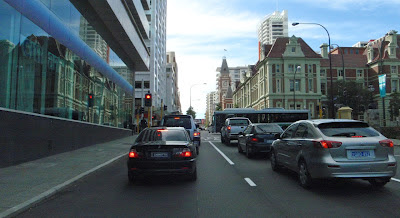 Melbourne has had its bike share system since May 2010. I recently went there for a short holiday with my wife and teenage daughter. Trying the bike share was high on my list of things-to-do. (Slightly lower for the other two, something about shopping being more important). We had tried a Barclay’s “Boris” Bike in London last year and this was a great opportunity to compare an Australian version.

Our first contact came when the three of us were walking around the docklands area. 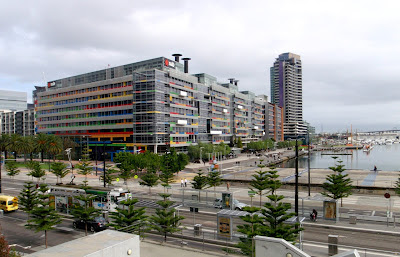 We spotted a stand with plenty of bikes and we all agreed that we should continue our wander on a bicycle. 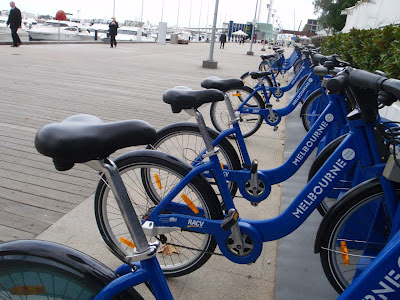 The docklands has lots of open space without much traffic so it would be a low-stress riding environment. 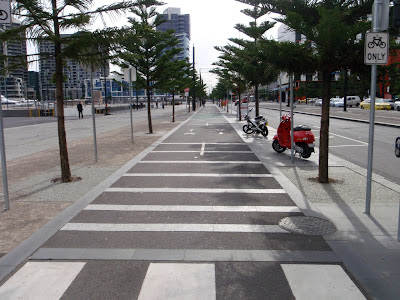 We read the instructions on the display panel. It said that helmets were available at a 7-Eleven shop nearby. Unfortunately, we couldn’t see it from where were standing. We did not want to go searching so the process became too hard and we decided to keep walking instead.

The inner city of Melbourne has a lot to offer at walking pace. During the next couple of days we were quite happy getting around on foot and catching the occasional tram but on my last day in the city I had a couple of hours to myself and was determined to give Melbourne Bike Share another try.

It was a Saturday afternoon and the stand in Swanston Street had plenty of bikes. The sign said helmets were available at 7-Eleven: 37 Swanston Street and the East Shard Building. 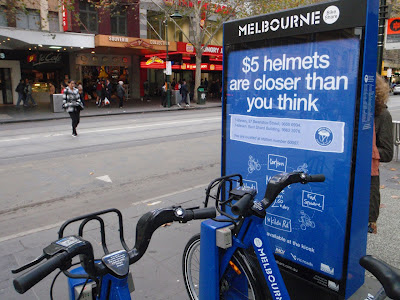 Not being a local, this was not a lot of information. I had no idea what the East Shard Building looked like but it did know I was standing in Swanston Street. Street numbers are usually not shown on shop fronts in Australia but fortunately I recognised the 7-Eleven logo about 100 metres away. 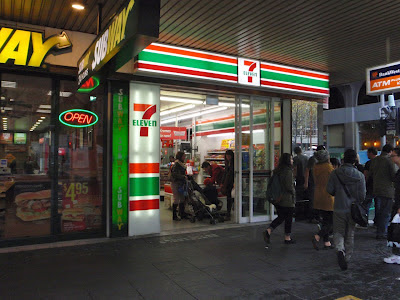 I quickly skipped across the street, went into the shop and asked to buy a helmet. “Sorry, we’re out of stock”. The shop assistant told me there was another 7-Eleven at Federation Square. OK, that should be easy to find, even for a tourist. It wasn’t far: about 200 metres down Swanston, then cross to the other side of Flinders Street. There was another full rack of bikes available as well. 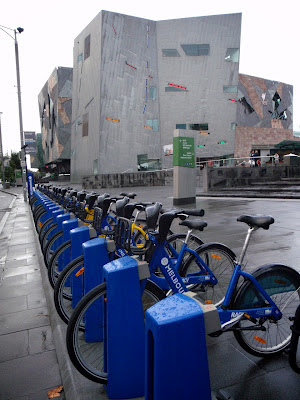 I found the shop easily but the answer was the same: “no helmets in stock”. At this point, it had been about ten minutes and I think most people would have given up. However, I was approaching the task with a bit more determination than the average person, I was doing research, so I pushed on.

Earlier in the day I had downloaded the phone app called Spotcycle and I used it to find another bike station. This one was on the other side of the river at Southbank. It was about a 15 minute walk and the station was also nearly full. 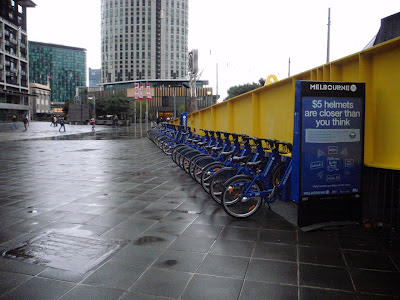 The sign told me that there were three 7-Elevens nearby but there was no help about which one was closest or in what direction. It would be so much better if they had a little map with “you are here” and the 7-Elevens indicated. I walked around a bit, scanning for clues then spotted the logo again. 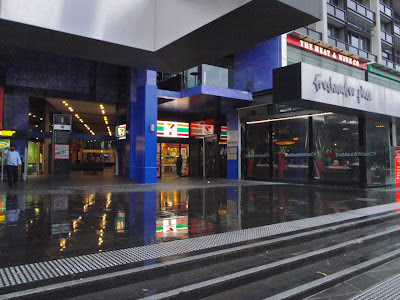 This time they had stock. There was a box in the corner with a dozen blue helmets. 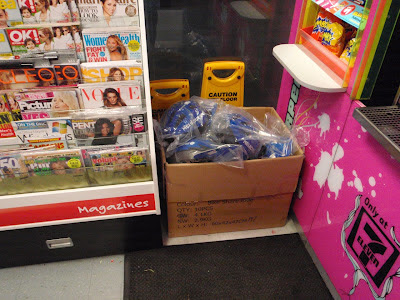 The first eleven I picked up were all brand new but the smallest size. 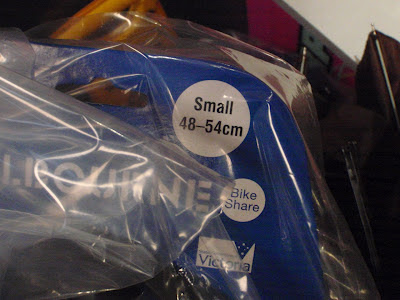 Finally, buried at the bottom, the last one was a “large”. It wasn’t wrapped and I think it had been used before but it would have to do. I noticed all the new ones were wrapped with cable ties and would have been impossible to unwrap without the help of scissors or pliers. So at least I didn’t have to deal with that problem. I paid the $5 and went back to the station.

The payment process for the bicycle is fairly easy. I used a Mastercard and followed the instructions. The cost is $2.60 for the daily subscription plus the trip fee. If you keep your rides to less than thirty minutes the trip is free. Thirty to sixty minutes is $2 but after that it gets expensive. If you go for a four-hour ride it will cost you $57. There is no limit to the number of times you can hire during a day so the best method is to make multiple shorter trips and get the bike back into a dock once you arrive at your destination.

One slightly worrying aspect is that a $50 security deposit is also taken. Do they really need to do this? They have a record of our credit card details, I think that should be enough. When I hired the Barclay’s Cycle in London I am fairly sure that a deposit was not required. 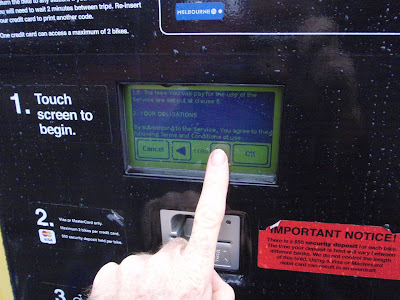 Perhaps they give the reason for the deposit in the eighty pages of General Terms and Conditions. It is a very small screen, I wonder if anyone has ever read them. I didn’t, it had taken me forty minutes to get this far and I wanted to get on a bike before dark.

The next step was to get my receipt and unlock the bike. We are told that there is a five-digit code that you press onto a keypad. My receipt had a reference number “54971”. OK that’s easy enough, until I realise that the key-pad next to the bike only has a choice of 1, 2 and 3. A bit of head scratching and I went back to the machine and find another ticket sitting in the tray. Ah…the code is “21313”. I feel slightly stupid but nobody is watching. 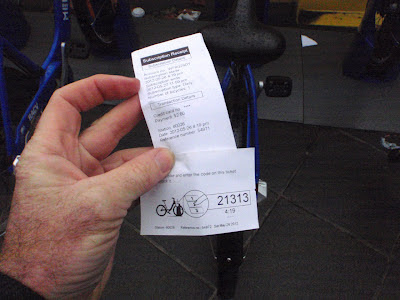 Finally I am on my way. The thing is heavier than I expected but everything works. It has three speed Nexus gears, lights front and back and a basic carrier that uses a bungy cord to secure your bag. 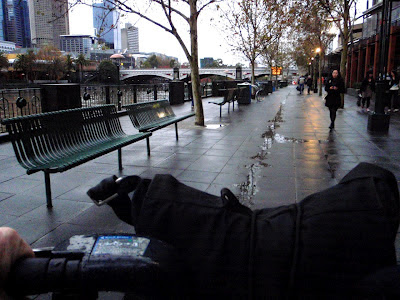 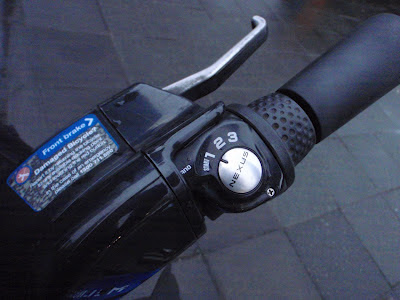 Wearing a helmet feels a bit odd but I decide to keep it on. The Melbourne police seem to be everywhere and for some strange reason they will think I am a criminal it they see me with a bare head on a bicycle. 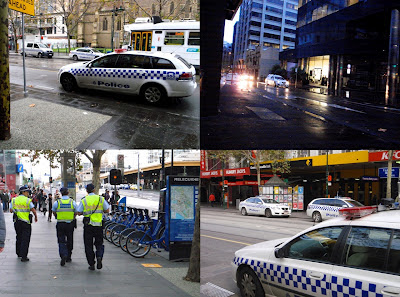 I had four days in Melbourne. The whole time was spent around the inner city and I only saw three other bike-share bikes being ridden during that time. The other riders were men aged 20 to 30 and two of them were riding without helmets.

You might also like to watch Mike Rubbo’s excellent film Message to Mebourne from Dublin Bikes. Mike has the blog Situp-cycle. The film has been around for a while and some of you will have seen it already. The message can be applied to Perth as well.