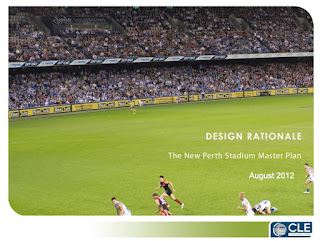 The master plan for Perth’s new sport stadium was released this week (7.7 Mb PDF). This new venue, with a seating capacity of 60,000, will become the largest in Western Australia. Currently Subiaco Oval holds that title and has seating for around 43,000.

It is debatable whether we actually need to spend $700+ million on another venue for watching sport. I could make an argument that the money would be better spent on infrastructure that would make it easier to get around our city on bicycles and as pedestrians. More doing: less watching.

There are many that would also argue that going to a game is doing and that there is something special about seeing a sporting contest with a massive crowd.

Once it is built, there will still be 140 larger stadiums around the world with more capacity. In that context, the proposal seems more modest and perhaps it can be justified considering Perth has a population of $1.8 million. If watching sport is not your thing, it will seem like a waste of money. If you are a regular at live games you will probably be thinking, just build it and hurry up. 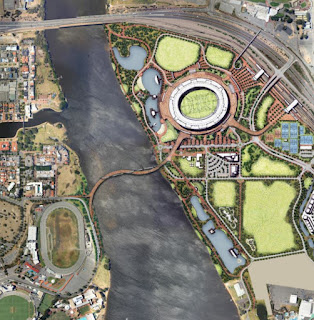 One of the most interesting aspects of the stadium plan is a new pedestrian bridge crossing the river from East Perth to the stadium area. We have known about this for a while, it was shown on an earlier draft proposal back in March, but no details were given. When I first saw it I thought, what a great idea, it would connect the shared bicycle-pedestrian paths on both sides of the river. People could ride to the games! I started to imagine families travelling together and lots of undercover bicycle parking around the stadium. After all, it would be a brand new facility and it could be easily incorporated into the design.

However I was worried that the bridge would be designed for pedestrians-only and now that I have seen the plan it appears that bicycles are not being considered. 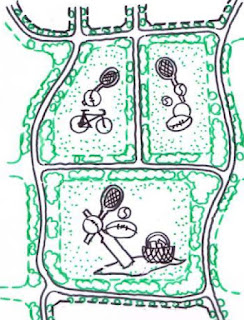 The document has only two insignificant references to bicycles. There are two drawings that group cycling with recreational pursuits but nothing in relation to transport. 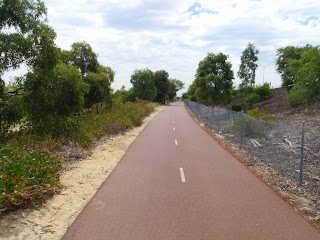 The Principal Shared Path that runs beside the Graham Farmer Freeway is not even shown on their map. 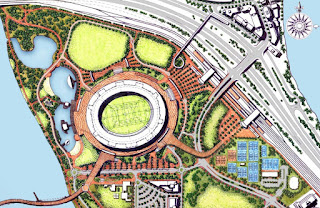 Transport to the stadium will be an important issue. The Burswood peninsula has is a very limited road network and movement is restricted by the barriers of river, rail line and freeway. The Perth Stadium website says that transport plans will be “based on a target of 70 per cent public transport use”. There is also a strong focus on pedestrian movements and the master plan even considers that people may walk for up to thirty minutes to reach the stadium. Moving 60,000 people in a short period is obviously a challenge and I think it is admirable that public transport and walking are being examined, but what about bicycles?

When will the Government of Western Australia’s Department of Planning start to recognise that bicycles are a transport option? Maybe they could have a chat with the people in the Department of Transport who produced the WA Bicycle Network Plan. Both of the departments are in the same building, these people probably see each other in the lift, but they are obviously not talking.

Perhaps they could look out the window and see how many people are getting around on bicycles. We have had a 7% increase this year and I can see the trend continuing. It is also an Australian Federal Government policy so there is no reason to not get the message.

Clearly, we need to have a bridge that can handle pedestrians and bicycles. Maybe it would have two levels or a central division to avoid conflict.

Now, thinking about parking. If the stadium holds 60,000 and 70% of people are using public transport, then the next biggest group will be the people who drive to East Perth and walk across the new bridge. Being realistic, maybe there would only be about 5% of people making the journey to the stadium by bicycle.

That means we need bicycle parking for 3,000 please. 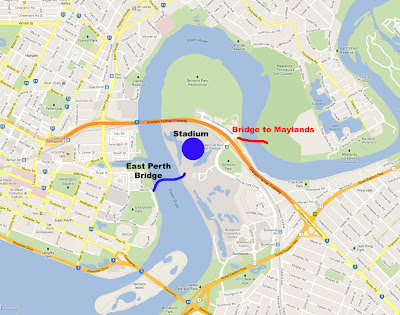 We need a bicycle-pedestrian bridge on the other side as well. This will connect Maylands to Burswood and East Perth.