Albany Cycling City - or not?

The City of Albany on Western Australia's south coast has an ambition to become a "cycling city". Albany is a port and has a population of around 34,000 people and is the oldest permanently settled city in Western Australia, predating Perth by a couple of years. It is potentially Western Australia's most attractive small city. The older, central area has many charming historic buildings with views across a natural harbour. 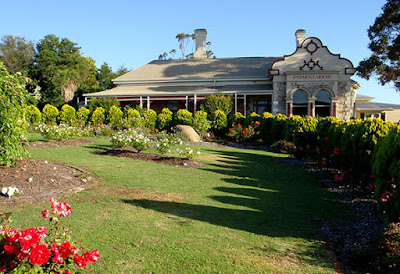 The coastline nearby is dramatic and there are a number of sparkling beaches with fine white sand. 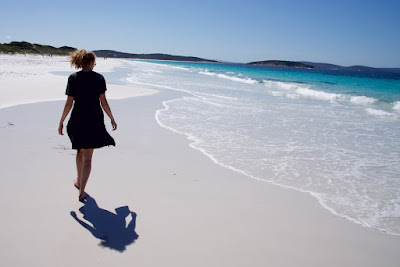 As with most of Western Australian regional centres, car driving is the major mode of transport. Albany has local buses but the service is infrequent with short duration. The last bus leaves the city centre at 4:35pm on weekdays; 1:40pm on Saturdays, and there are no buses on Sundays or public holidays. If you work nine-to-five in the city and live in the suburbs, you would need to drive a car, ride a bike or walk. Albany's low density would make life difficult for anyone just relying on walking. Using a bicycle is a logical option if the riding environment is good. 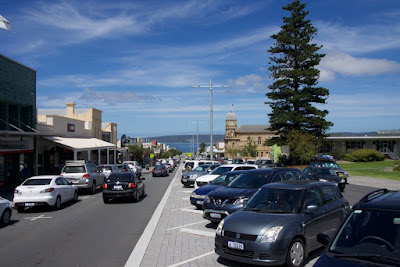 In 2014 the Cycle City Albany Strategy 2014-2019 was published (summary here 2.8 MB PDF or the longer version here 30.5 MB PDF). It is admirable effort for a city of Albany's size. In conjunction with Cardno consultants, the state government, local businesses and the community the have produced 389 pages of detailed study and proposals. 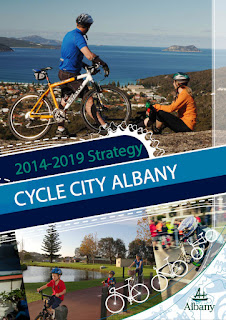 The five key objectives are:


1. The Cycling Network - To develop and maintain a bicycling network of safe, connected and accessible routes and facilities.

2. Cycling participation - To be a city where walking and cycling becomes the easy choice for travel of trips of up to 5 kms around identified community hubs.

3. Safety and respect for all users - To develop a bike riding culture in the City of Albany so that cycling is seen as a legitimate and normal use of the road, with mutual respect between all users.

4. Cycling Tourism - To be a city that is recognised as a prominent regional cycling destination, delivering economic and tourism benefits for the community.

These objectives seem reasonable. They are the sort of goals you would expect for any city wanting to improve, but what is the desired result? For example, Albany's mode-share for bike trips at the start of the strategy was around 1%, what percentage gain is Albany trying to achieve?

The use of the term "Cycle City" is bold. For anyone who has travelled in Europe it brings to mind wonderful cities where bike riding is normal and done by a wide range of people. Many of those cities have a bike mode-share of 20% or higher. 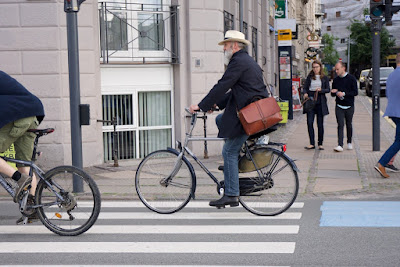 There are a lot of factors involved in having a good cycling city. Mode-share is important, so is the quality of infrastructure, but also, social acceptance and driver behaviour play a big part.

The City of Albany is promising a lot. The Mayor, Dennis Wellington said:


"we want to transform Albany into one of Australia's best cycling destinations, including both on and off road cycling. We aim to do this by improving cycling infrastructure, encouraging cycling as a legitimate mode of transport, improving the culture surrounding cycling, and by encouraging more cycle tourism."

Using the term Cycle City will create high expectations. Albany has had some success with promoting the sport of cycling in the past few years; the Southern MTB festival is a good example. They have also included strategies to improve how bicycle transport is perceived by people. However, the City of Albany's infrastructure proposals which could encourage riding a bike for transport are mediocre and unlikely to deliver any significant increase in riding. The City of Albany is simply setting-the-bar too low.

The strategy lists 82 possible improvements (Appendix F - Indicative Works and Funding, page 221). Of these, more than 50 are improvements to on-road infrastructure. I am sure these will be appreciated by the small percentage of Albany people riding a bike now. It may also encourage a few more brave people to dust off their bikes but it will not change the behaviour of the majority of people.

The extension to shoulders of Golf Links Road is an example. This extra bit of space on the edge of the 70 km/h road will be good for the confident sporting cyclists doing training on a Saturday morning but it is unlikely to be used by children travelling to school or by tourists to visit the beach. 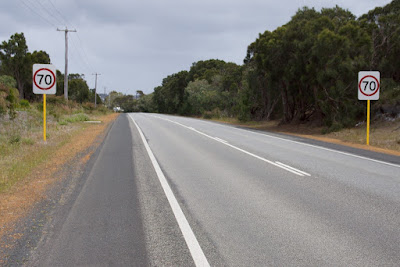 This sort of provision for cycling is nothing special. A 1.5 metre lane on the side of a 70 km/h road is the current minimum standard specified by Austroads. To become a Cycle City, Albany will have to do more, and do it better.

Another disappointing example is Frenchman Bay Road. As the City Cycle Albany Strategy concedes, "this road is the only access to some of Albany's best known tourist attractions...a growing number of tourists were attempting to cycle [to the attractions] and complained about the intimidating  cycling conditions". The road has a speed limit of 80 km/h and no sealed shoulders. In the short term, the City of Albany's fix for this problem has been some share-the-road signs. 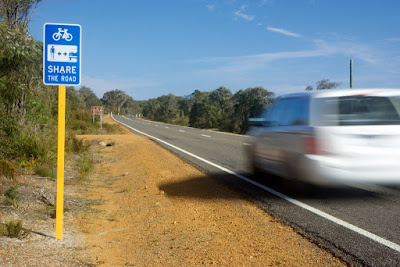 Their long-term plan, is to consider the possibility of the widening the road and adding 1.5 metres shoulders. That is simply not good enough for most people. The majority do not feel safe riding a bike using on-road cycle lanes next to high-speed vehicles.  If the City of Albany is genuine about being a Cycle City for tourists there should be a separated cycle track or shared path along the Frenchman Bay Road route.

The Western Australia State Government recently invested $6.1 million to improve two key tourist attractions that are reached via this road: The Gap and the Natural Bridge. The attractions currently have 210,000 visitors per year. How many more visitors would there be if people didn't need a car to get there? 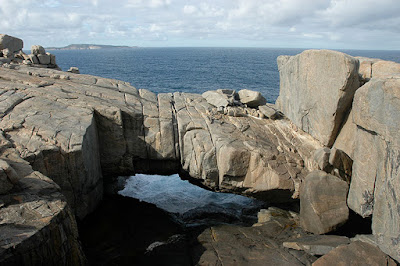 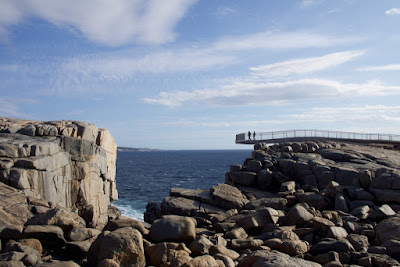 Curiously, the new parking area at The Gap has ten bike racks. They must be expecting pelotons of sporting cyclists or a lot of very brave tourists. The destination has been improved, but not how to get there. These tourist attractions are 18 kms from the centre of Albany and just 7 kms from the suburb of Little Grove. That is a bike-able distance for many tourists. The state government could complete the job and provide funding for a cycle track. 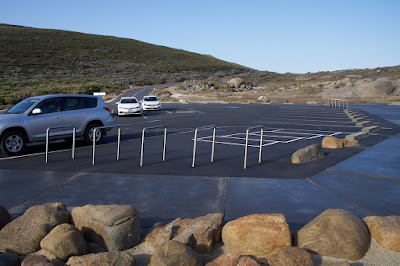 A separated cycle track next to Frenchman Bay Road would provide safe access to other natural attractions within the Torndirrup National Park and also the stunning Goode Beach and village nearby. 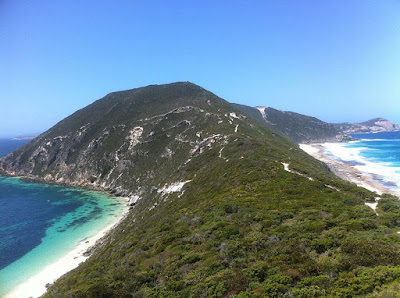 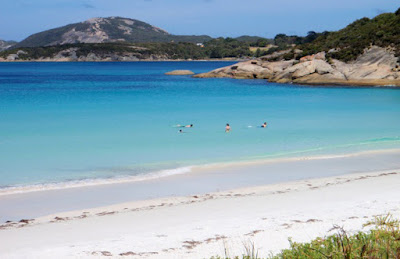 The Cycle City Albany Strategy 2014-2019 also includes several shared paths and some of these will be important links for people on bikes. But again, the City of Albany has set low standards. Almost all of the shared paths have been specified as bi-directional with a width of 2.5 metres. Austroads specify this as the minimum width for shared local-access paths and not suitable for commuting by bicycle.

The City of Albany, in their Strategy, has relegated commuter cyclists to the road. It states that commuter cyclists have "medium to advanced confidence levels...[and] travel speeds are generally higher than what casual cyclists achieve which makes them more suited to riding on the roadway".

People commuting by bike only ride on the road if there is not a good alternative. If there is a protected cycle track, or a even a shared-path of good standard and reasonably continuous priority along the same route as the road, they will not ride on the road with motor traffic. The paths should be smooth and not stop at every driveway and side street.  An example below. 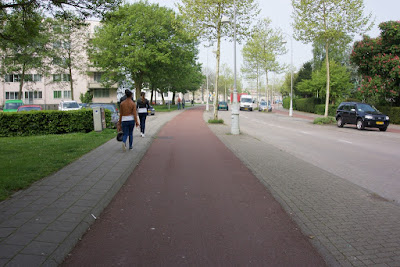 Albany should design for the majority of people who would like to ride a bike, not just the 1% who are riding now. It could then become a cycling-city with normal commuters like this. 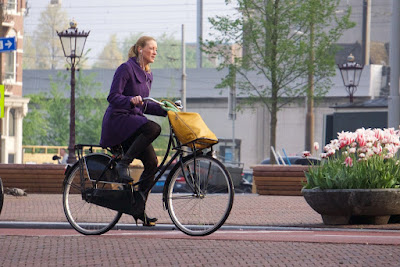 A guest post from former business journalist and urban freewheeler Charlotte Dudley who interviewed Mark Wagenbuur during his recent visit to Australia. 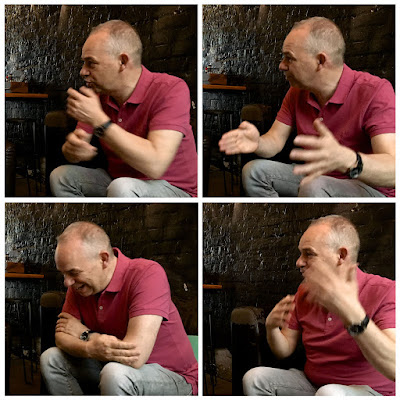 The prolific blogger behind the Bicycle Dutch website said if Australia made it safe, useful and normal for people to ride bicycles they would, especially for short distances.


“Humans are not naturally inactive, they’re made inactive by their circumstances. If active travel is a viable option you immediately take your natural habit again and you move,” said blogger, filmmaker and newly minted Dutch Cycling Embassy ambassador Mark Wagenbuur.

Wagenbuur, whose short films about cycling in the Netherlands and elsewhere have been viewed millions of times, visited Australia recently to meet with transport planners and officials in Brisbane, Canberra and Perth.

He said Australian cycling planning should focus on bikes for short distance trips to local destinations such as schools and train stations.

Wagenbuur, whose own 50km daily commute starts with a leisurely 2km bike ride to the train station, said creating a network of slow speed local streets around schools and rail stations would support more short cycling trips. It would also shift the perception of cycling from a sports activity to a means of transport for ordinary people.

“It’s the same all over in Australia. Everybody seems to wear Lycra,” he said.

“Riding a bike is not seen as a normal activity. It’s seen as a sport. And you have to dress up for it. The whole perception needs to change.

“I was in Brisbane for three days and I only saw one child on a bike and that’s really telling you something. That’s a shame, it tells you it’s not safe for everyone.”  (For more impressions of Brisbane by bike, see Bicycle Dutch’s 2013 film. He also did one on Sydney.)

Common Australian cycling initiatives such as painted lanes, encouragement campaigns and maps don’t get people on bikes with Wagenbuur saying the key is in creating narrow, slow speed suburban streets of 30km/h where bikes and cars can comfortably share the road. On higher speed roads dedicated infrastructure that separates bicycles from car traffic is necessary.

“A lot of people still think Dutch cycling means cycle paths everywhere and that’s just not true. You don’t have to have separated cycling infrastructure everywhere; just on some key roads,” he said.

Wagenbuur also rejected the notion that the Dutch ride bikes for cultural reasons.

“After world war two we embraced the car, the car was the future. There were big plans for highways right through Amsterdam but when they started tearing down buildings, then people started to ask what’s going on?  The whole idea of what a city was started to shift.”

With a new mindset about cities and a skyrocketing road toll, which included many child deaths, it wasn’t until the 1970s that the Netherlands shifted away from car-oriented transport planning, he said. The new “people-friendly” approach focused on narrower, slower and safer streets and made bike riding possible for people of all ages and abilities.

(This history is explored in Wagenbuur’s short film How the Dutch got their cycle paths). 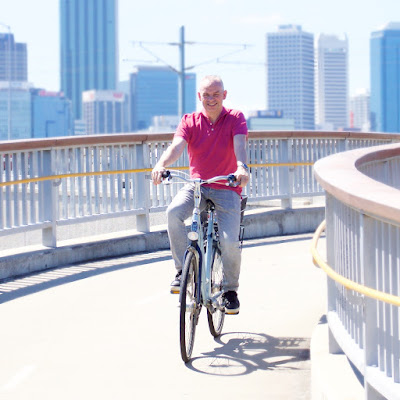