An article in the Post newspaper this week has caught my attention. The Town of Mosman Park, one of Perth's smaller local government areas, has decided they need to change the intersection at Glyde Street and Stirling Highway. They want to modify the lanes to allow two rows of vehicles to turn right at the same time. The idea is to reduce the waiting time of motorists queuing. It seems the deputy mayor thinks this is the town's most important community project. 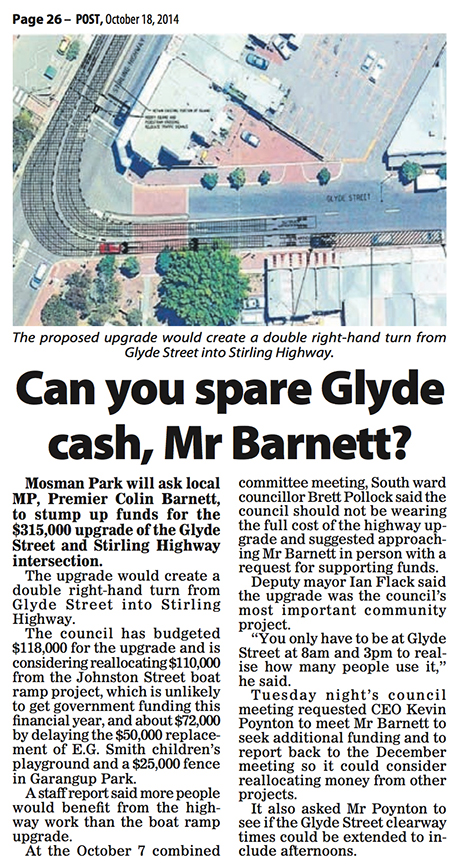 It is not clearly stated in the article but the main benefit will be easing congestion for traffic traveling to the highway after accessing the schools at the eastern end of Glyde Street. The peak times are "at 8am and 3pm". They want to make it easier for parents to drive their children to school.

These sorts of modifications are surprisingly costly. The total for the works is expected to be $315,000. Glyde Street is a local government road and Stirling Highway is a WA State Government road. Logically, the people at the Town of Mosman Park are expecting the costs to be split between the two. To find the money, the Town of Mosman Park is considering delaying spending on local community works including a children's playground.

In total the Town of Mosman Park is proposing to spend $228,000 on this project. If I was a resident of the town, I would prefer my money was spent on transport solutions to have less motor vehicles through my neighbourhood, not encouraging them.

Some potential alternative projects can be found in the Town of Mosman Park's Cycling & Pedestrian Plan 2012-2032 done two years ago. (The document is still in "draft" form. It is clearly not their most important community project.)

Here are a few of these projects that could be done sooner:

Proposed for 2015/16
$210,000 for 1.7 km shared-path which would be a "Principal north-south link though LGA (local government area), serving a number of schools". Possibly only $105,000 with state government assistance funds.

Proposed for 2024/25
$50,000 to build 185 metres of shared-path, 2.5 metres wide, beside Stirling Highway. This would connect missing path sections in the Wallace Lane area.

Proposed for 2030/31
$230,000 to provide 1.7 km of on-road bicycle lanes 1.5 metres wide on Wellington Street. The town's plan states this would provide "key east-west linkage though the southern half of the LGA".

Proposed for 2030/31
$70,000 to provide on-road bicycle lanes 1.5 metres wide on Glyde Street between Stirling Highway and Palmerston Street. The plan states the lanes are required because this is a "key commuter route to Mosman Park town centre and Mosman Park train station".

I find this last one particularly interesting. For the same section of road, the Town of Mosman Park would spend $228,000 now to reduce waiting times for motorists yet the $70,000 bicycle lanes can wait until 2030. 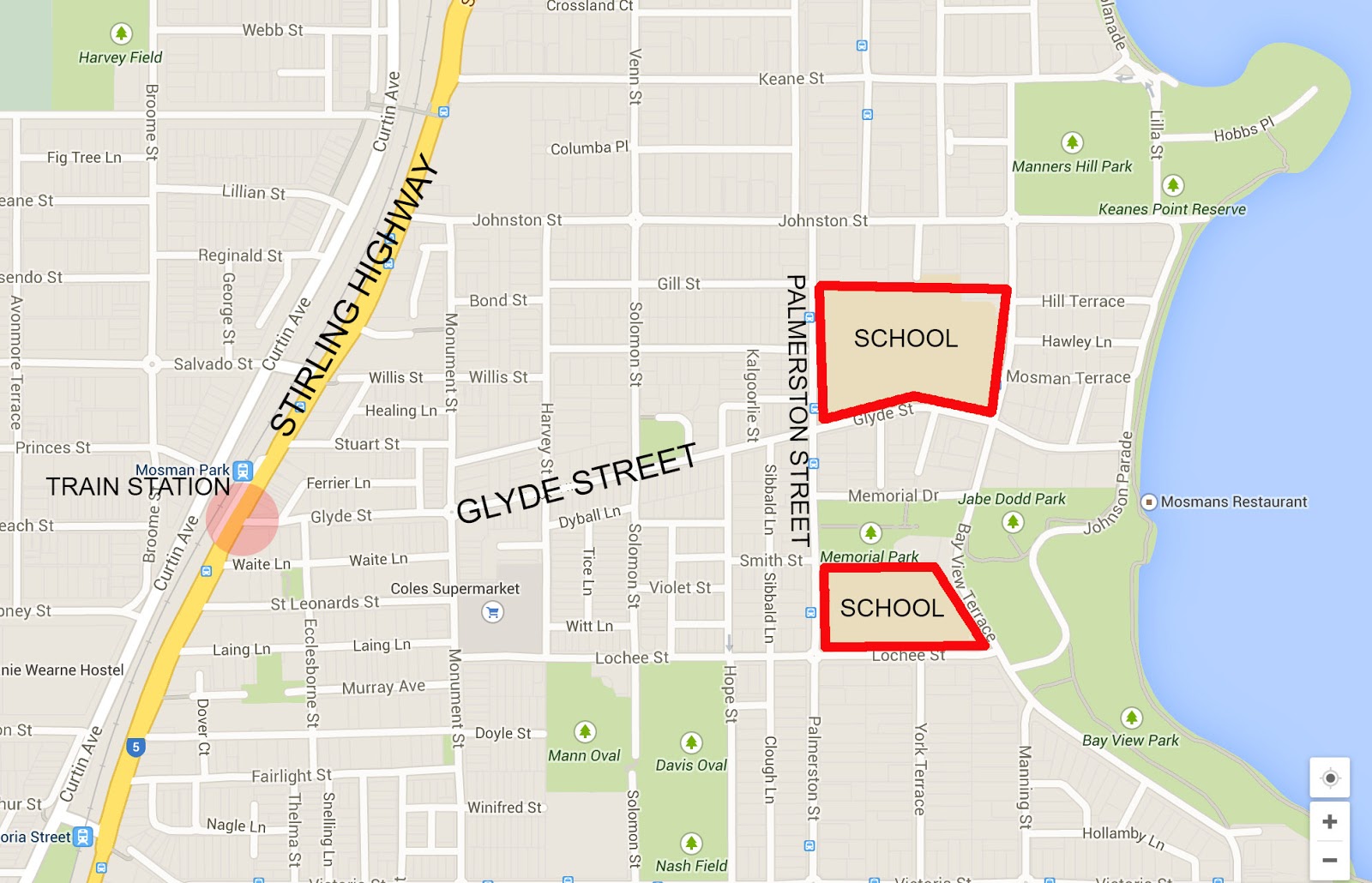 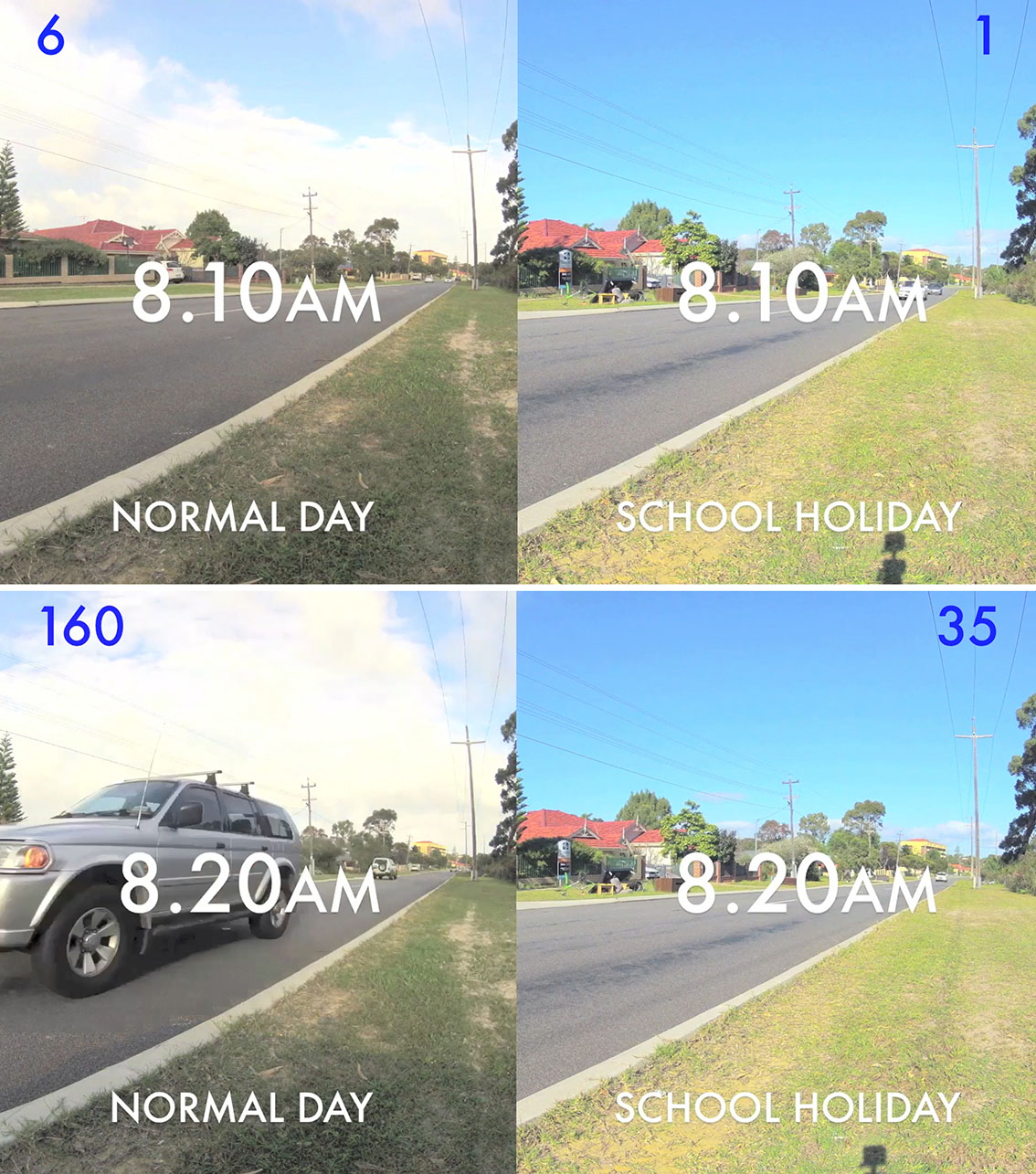 I've made a new film. There’s no music or voice-over. Nothing much happens, it’s just 50 minutes of morning traffic in a suburb of Perth. A comparison between traffic on a normal Friday and five weeks later on a Friday during the school holidays.

You won’t be seeing this one on the film festival circuit.

The recording time has been compressed to three and a half minutes, and I’ve added a counter showing the number of motor vehicles. Even with that exciting addition I expect most people will skim to the end.

In Australia it has become normal to drive children to school. There are various figures: some say 51% are taken by car, others say 75%. In this film it appears to be even more.

Most parents consider it's not safe enough for children to walk or ride bikes to school because there are so many parents driving their children to school. It has taken Australia only one generation to get into this crazy spiral.

Next time somebody complains about road congestion and suggests spending our money on a new freeway, bypass or extra slip lanes at intersections, we can remind them that designing our roads to  enable our children to travel to school by themselves will be cheaper and better for all of us. We will have money for separated bicycle tracks if we stop wasting money fixing the wrong problem.

This is Jeans Road in Karrinyup. There are three schools nearby: St Mary's Anglican School for girls (Kindergarden to Year 12), Deanmore Primary School and Our Lady of Good Counsel Catholic Primary School. St Mary's has over 1350 students, they can arrive at school from 8:00am however the preference is for students to arrive between 8:30 and 8:55am. 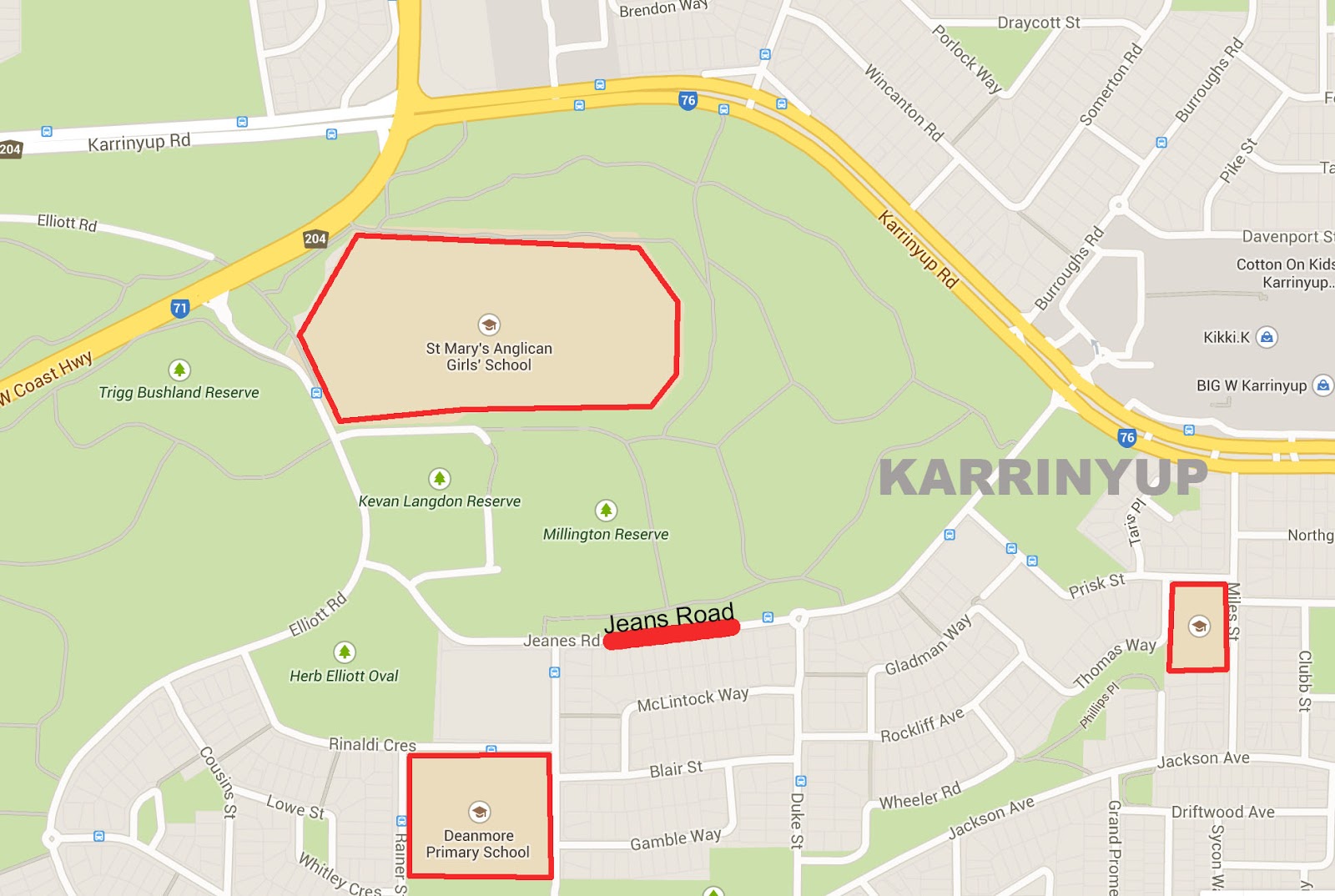