Roe Street Perth. An opportunity for a better city.

The City of Perth is proposing to upgrade Roe Street. The "enhancement" is currently at the community and stakeholder consultation phase. Comments can be made here until 31 October 2019.


The City seems to be downplaying the significance of this change and the opportunity it presents. This will be more than an enhancement. It's a 1.2 kilometre stretch of inner city street that will be completely rebuilt between property boundaries. The railway reserve on the southern side is currently empty as a result of trains being put below ground. Instead of weeds and fencing, there will be commercial buildings. What has been a single-sided street for 100 years will become double-sided. The area between the buildings is a like a blank canvas and we can choose to make it whatever we want. This is a once-in-a-lifetime opportunity to knit the city together, to make it more walkable and better for cycling.


Unfortunately, the City of Perth is proposing to facilitate motor vehicle traffic at current levels. Some positive aspects: the footpaths will be wide and there will be trees, but the proposal for cycling is inadequate. The cycling infrastructure within the Roe Street proposal is not best-practise by current international standards, but not only that, it doesn't even meet Austroads recommendations from 2011.

At first glance it appears the City is improving cycling. The proposal describes "protected cycle lanes" but looking at the detail, it's apparent there are many flaws. The existing street has a three-metre wide bi-directional shared path which stops at each intersection. It's not ideal, but it's suitable for people of all-ages and abilities. The proposed cycle lanes, which are separated from pedestrians, will only be suitable for experienced and confident cyclists. The lack of protection in key places will be a problem. The City is hoping to reduce conflict between pedestrians and cyclists but this  proposal will result in many people continuing to cycle on the footpaths.

Uni-directional cycle paths on both sides of the street, separated from pedestrians and motor vehicles could be great, but it needs to be done to a much better standard than currently proposed.

I urge everyone who wants a better city to contact the City of Perth and tell them this proposal is not good enough. You can look at some of the detail that follows but if you read no further, here are the key points: 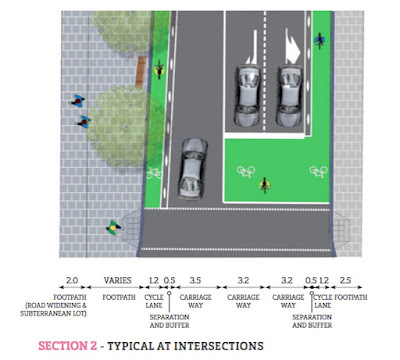 Even if the cycle lanes had a width of 1.5m all the way, this is not sufficient to provide safe side-by-side riding and it does not allow enough space for a single cyclist to pass a slower cyclist safely. A width of 2.0m is considered the minimum by international standards for a protected cycle track (e.g. CROW Design Manual for Bicycle Traffic and NACTO Global Streets Design Guide).  Even if you think "Perth isn't Copenhagen...those rules don't apply to us" we should at least work to the Austroads standards. The illustration below is from Cycling Aspects of Austroads Guides which specifies a minimum of 1.8m and recommends separation of 1.0m to provide clearance from car doors where kerbside parking is likely to occur.


You don't have to read the street design manuals. Simply ride on any of Perth's bidirectional 3.0m wide paths and try passing a slower cyclist without crossing the painted centre line.

Although the City of Perth states the proposed cycle lanes are protected, they are not protected in all places. There is no protection on the east-bound lane where is passes the loading bays between Nick's Lane and William Street. At this point there is no protection for people cycling at all. The cycle lane passes between moving traffic and parked vehicles being unloaded. Also note that the loading bays are only 2.3m wide and most trucks are 2.5m wide plus mirrors. 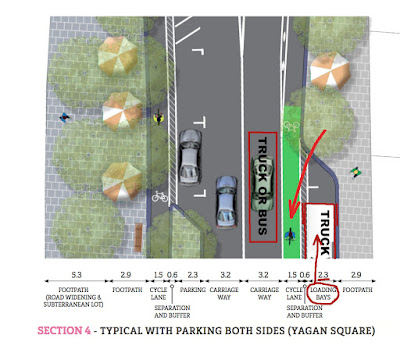 There is also no protection when the cycle lane passes the two five-minute bays near the train station. At both the loading zone and the five-minute car bay areas will have a high turnover of moving motor vehicles. These are not the sort of places you would want to ride with a child. A protected cycle path should travel on the footpath side of these hazards. 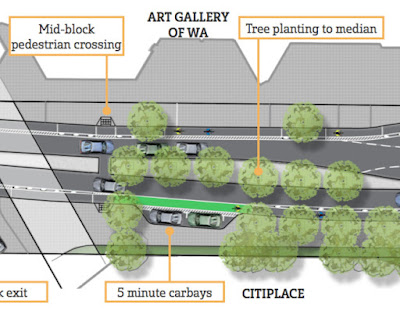 At places where the cycle lanes pass driveways there is no protection, and not even green paint. As the proposed cycle lanes are at street level, people cycling will be getting no help at these conflict points. No green paint across driveways is fairly common in Australia, however it is interesting to note there is also no paint proposed across the four-lane entry and exit to the City of Perth's own parking building which has 573 car bays. This will be another high-risk area. 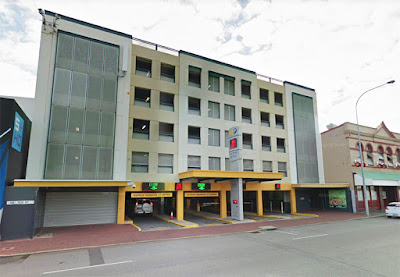 Where the cycle lanes travel on the inside of parked cars there is also a problem. The cycle lanes will have good separation from motor vehicles in the travel lane but there is no protection from cars moving into the parking bays. There is a 600mm buffer proposed but it is just paint. This paint will not prevent car drivers parking in the cycle lane or parking on top of the painted buffer. It will not prevent car drivers crossing into the cycle lane when they manoeuvre their cars as they park. Without a kerb to separate the car parking bays, you can expect it to happen... frequently! 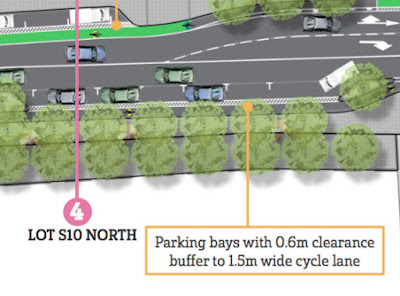 The intersections are also not protected.  Head-start boxes are planned, these can be useful for confident riders but they are not recommended for people of all ages and abilities.

With the proposed design there is a high risk of car passengers opening their doors into the path of people cycling. This is because the 1.5m lane will have insufficient width for passing and faster cyclists will use the paint buffer area as a riding space.

There are only two five-minute car parking bays along the entire 1.2km length. We can expect taxi drivers, including Uber and Ola, to block the cycle lanes at the driveway areas for their pickups and set-downs. As these cycle lanes are at street level and there are no barriers this will be the driver's easiest option. Obviously, taxis can be a problem for any cycle path, but the on-street design and lack of a continuous colour to help define the cycling space will increase the probability.

The City of Perth currently has a policy of using barrier kerbing (square) to define the change from motor vehicle carriageway to footpath. The Roe Street cycle lanes, by being at motor vehicle grade, will probably have the same kerbing as currently used in other recently upgraded streets within the city. These are difficult to mount and would discourage cyclists entering and exiting the cycle lane mid-block.

This is an important detail because if semi-mountable kerbing of a suitable height is not used the effective width of a cycle lane (or path) is reduced and the safe movement of people cycling is restricted. Where the lane is enclosed on both sides and only 1.5m wide this presents a risk for rear-end collisions because people would need to come to a complete stop to lift their cycle over the kerb at a destination. 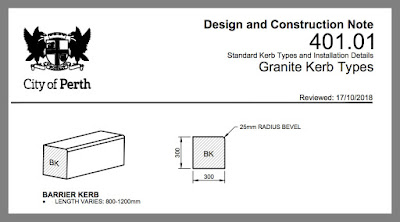 There appears to be no reduction in motor vehicle movement capacity along Roe Street. Nearly all intersections have the same number of travel and turning lanes. The exception is Lake Street where is enters Roe. That intersection will have an increase in capacity with an extra lane being added.

At the Beaufort Street end, Roe Street will still have four motor vehicle lanes. At this point the cycle lanes are reduced to 1.2m and the footpaths are narrowest. This is not the sort of allocation of street space found in good walking and cycling cities. 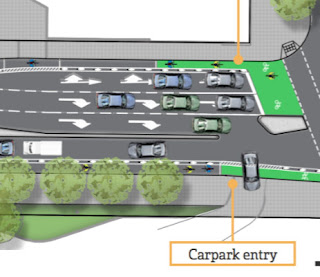 This is currently one of Perth's busiest cycling intersections. The fourth lane enables drivers to enter the carpark building on the south side from both directions. It is not essential, there are multi-level carparks on both sides of the street! 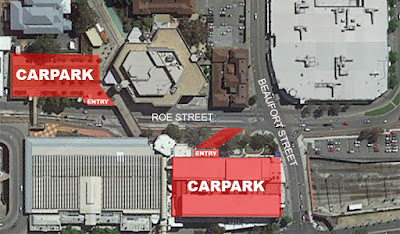 This additional turning lane creates an increased safety risk for cyclists and pedestrians. The Citiplace carpark on the southern side of Roe Street was built in 1987 and the turning lane would have been created at the same time. That was also the period when the City of Perth was using the advertising campaign slogan "Your car is as welcome as you are". That's out-of-date now, so is the turning lane.

Some of the pedestrian crossings have been moved away from natural desire lines. An example is the east-west crossing at Melbourne Street. This is annoying and usually results in non-compliance. People will walk along the shortest route whether it's the official crossing or not. People want to walk directly from A to B, not via C. 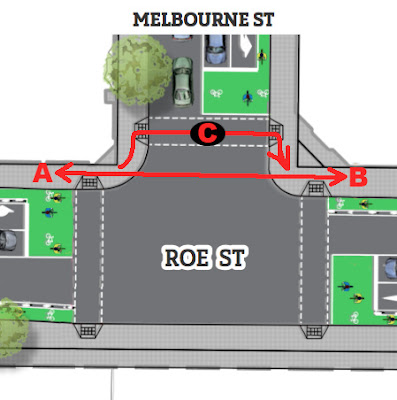 The elevation below can be found on page three of the "Roe Street Enhancement Revised Masterplan 2019". It is not to scale. The motor vehicle lanes have been shown much narrower than the widths  proposed by the City of Perth. This gives the impression there is not enough room to allocate more space for cycling.

In the elevation, if we accept the cycles lanes are 1.5m, the motor vehicle lanes have been drawn at about 2.3m wide. There is one metre missing from each lane.

If presented correctly, the motor vehicle space would be two metres wider.

Another misleading image can be found in the "Existing and Proposed Cross Section" document. Again, the proportion of street space allocated to motor vehicles is incorrectly presented. Here is the image in its original form. 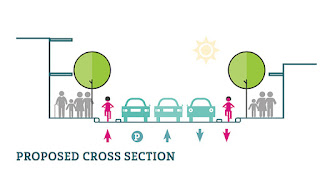 This corrected version shows the motor vehicle lanes in true proportion and also demonstrates how wide some of the footpaths will be in comparison to the cycling space. 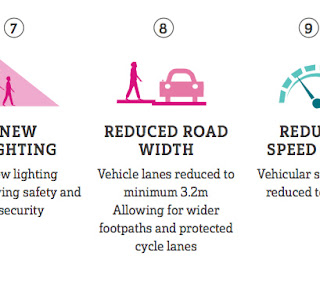 The existing travel lane is 3.2m wide and the proposed travel lane will still be 3.2m. The saving of space will be made from a reduction in the width of the parking lanes, not the travel lanes.