We paint streets and ignore parking

Reading Mark Wagenbuur’s recent blog post about creating a contra-flow cycle facility in the Dutch city of ‘s-Hertogenbosch reminded me of a stupid Australian version in Adelaide.

During the Velo-city conference in 2014 we visited a couple of primary schools to learn about the Way2Go education program in South Australia. At Sturt Street Community School we were shown   how the school’s main outdoor sports area was located a few blocks away. The local government (City of Adelaide) was in the process of improving access to the sports ground and proudly showed their proposal to allow contra-flow cycling on Little Sturt Street.

Little Sturt Street had one-way motor vehicle traffic in a northerly direction. There were parking bays on both sides of the street and a central travel lane. I was astonished to learn City of Adelaide's “improvement” for the children was to encourage contra-flow cycling in the existing travel lane, but planned to keep both rows of car parking. The law was changed to allow cycling in both directions, yet no additional space was allocated.

The City's strategy involved painting a short entry lane to feed cycle traffic into the path of oncoming cars at the northern end; and to provide another short section of painted lane at the southern end for anyone who survived. These treatments have now been completed and can be seen on the current Google Street View images below.

Another element attempting to encourage cycling was the addition of a painted design on the street surface at the intersection with Maxwell Street. This place-making exercise involved the neighbourhood children with intention to slow traffic and give the children a feeling of ownership.

City of Adelaide has taken a lot of care to consider the minor and decorative details of the street. But, they have not solved the obvious problem: there are too many parked vehicles occupying valuable space that should be used to provide a safe cycle track.

The City of Adelaide currently has 44,700 publicly available car parking spaces. This is the most parking of any Australian city, more than Sydney and Perth combined. Adelaide's total includes 18,400 on-street parking spaces in an area of just 15.5 square kilometres.

It is interesting to compare the two Dutch and Australian streets. Both are inner city streets with a mix of residential and commercial use. They are a similar length: 150 - 250 metres. Both had a need for contra-flow cycling. The potential cycling traffic in the Dutch street would be a mixture of people of all ages. In the Australian street there could be people of all ages, but it was specifically targeted at the needs of primary school children.

In both cities car parking is considered a valuable commodity, however car parking is probably more valuable in the Dutch city. As Mark Wagenbuur describes, the s'Hertogenbosch municipality have a waiting list for people wanting car parking spaces, with 200 listed as of late 2015. When the residents finally manage to get a permit they pay €208 per year for the privilege.

So how did the Dutch city manage to remove eight highly prized on-street parking bays from their city street, yet Adelaide could not?

Surely Australians care for their children as much Dutch people care for theirs? Have we become so obsessed with our car parking spaces we've become disconnected from logical reasoning?

It has become standard practise in Australia to fiddle around with paint on streets. We upgrade paving, plant trees and create websites to encourage behaviour change yet do very little to remove cars. We are dancing around and ignoring the elephant in the room.

How many local and state government bike plans or cycling strategies include parking management?
Queensland recently released a cycling strategy: the state's vision for the next ten years. The action plan called for leadership from six different state government departments yet I could not find anything about reducing car parking.

On-street car parking is a major restriction for building safe cycling infrastructure. While there continues to be an abundance of car parking in Australia, we will continue to drive. Any long term cycling plan should include a strategy to reduce this problem.

Back in 2014, we watched the children from Sturt Street Community School being taught cycling skills in the small playground at the side of the school. 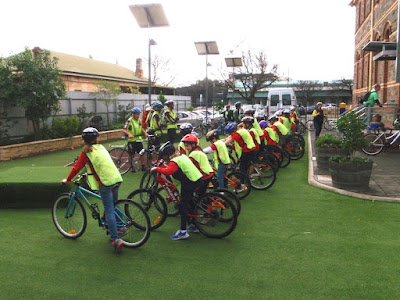 When leaving I noticed this sign on the street-side gate. I took a quick photograph because I thought it was slightly strange. 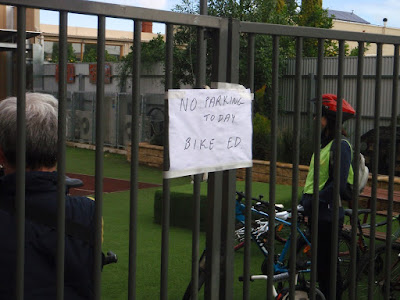 The puzzle has been solved with the help of Google Street View. On a normal school day, when Bike Ed is not happening, it seems the staff squeeze their cars onto the school grounds and take over what could be a playground for children. This is an inner-city school with limited space for outdoor play.