Bay View Terrace is one of the main shopping streets is the upmarket suburb of Claremont.  It has recently had a makeover using the Shared Space design concept.  The result is a failure.  The idea was to create a welcoming space that would become a destination.  A pedestrian friendly town centre that encouraged people to linger. 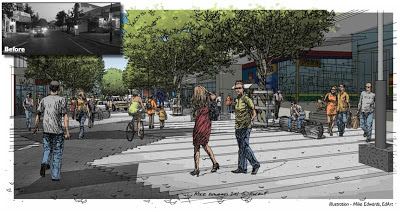 This is how is it looks now… 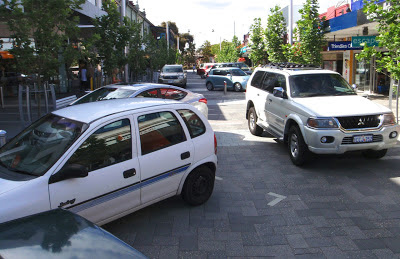 The central part of the street is dominated by vehicles and pedestrians are using the paths close to the shop fronts as they have always done.

Two of the Town of Claremont’s key principles for the street after completion of the upgrade was that “pedestrians have first priority” but strangely, they also confirmed that they would “maintain on-street parking numbers”.  These are two opposing principles. Pedestrians will not feel that they have priority with that many vehicles moving around them.  There are so many parking spaces in the street I am not sure that it still conforms to the Shared Space concept.

The Shared Space approach is

to minimise demarcations between vehicle traffic and pedestrians, often by removing features such as kerbs, road surface markings, traffic signs and regulations….First proposed in 1991, the term is now strongly associated to the work of Hans Monderman who suggested that by creating a greater sense of uncertainty and making it unclear who had right of way, drivers reduce their speed, and everyone reduces their level of risk compensation (Wikipedia)

The theory is that road users will negotiate the space on equal terms.  A nice idea. However, the reality is that a motorist encased in a tonne of metal will intimidate most pedestrians.  The Shared Space concept is a romantic ideal that I have not seen applied with complete success. There are examples from The Netherlands you can read about on the blog A View from the Cycle Path and in the UK on Vole O'Speed. 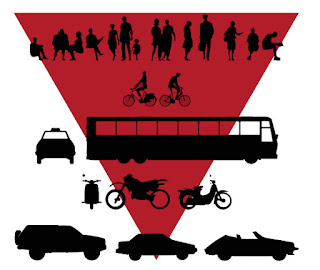 Cars are currently not at the bottom of the hierarchy.  I think the Town of Claremont may have actually increased the number of car parking spaces from 31 to 32.  They have also created a situation which will encourage a high volume of vehicle traffic through the area.  The time limit for the parking bays has been restricted to a maximum of thirty minutes.  This guarantees there will be a high turnover of vehicles. In addition, the parking is free which means that there will be a regular flow of motorists cruising through the street hoping to find a free bay instead of driving directly to the off-street parking stations in the area.  Some will even loop the block in the vain hope of finding a vacant spot next time.  It will create a lot of extra traffic in a street that is meant to be a “high quality, pedestrian orientated, public realm”.

You can see it happening in this photograph below. The row of cars on the left are all cruising through the street, having turned off from Stirling Highway.  It is 2:50pm on a Friday. 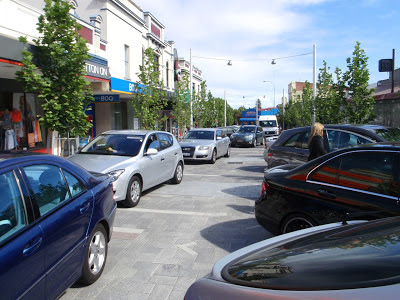 Another example of vehicles having priority.  Most people would get very nervous about using this telephone box with vehicles being parked so close behind. 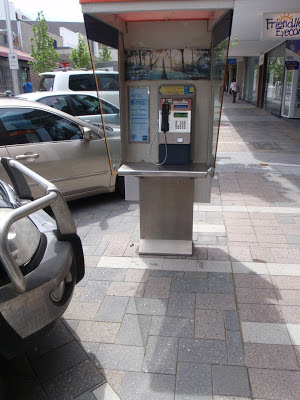 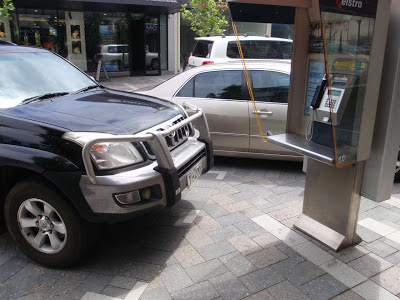 Why did they try to squeeze so much parking into this area?  I suspect that it was the retailers worrying about losing customers.  If they had a little more courage and got rid of the cars they would find that an attractive pedestrian mall would increase their trade.

Bay View Terrace would be much more attractive without the vehicles. 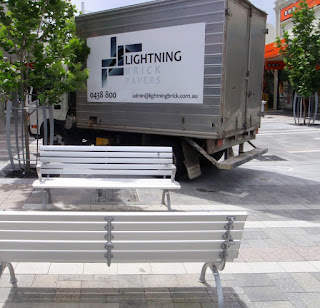 The landscaping would not need compromises to cope with vehicle movements.  Bollards like this could be removed. 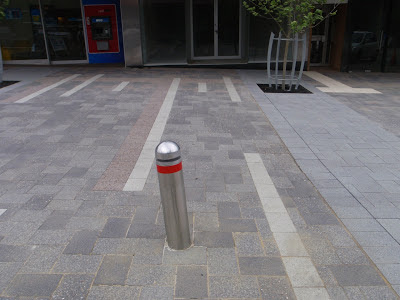 And these aggressive looking tree protectors could be removed sooner. 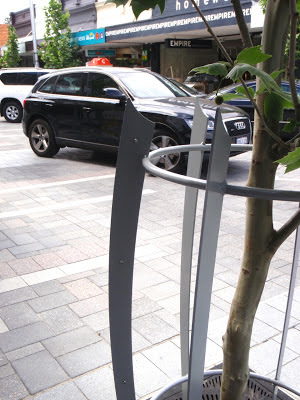 It is impossible for a pedestrian to relax in what will stay the central vehicle zone of the street.   The street has one-way traffic which could help pedestrians anticipate vehicle movements except that the one-way flow is different at each end of the street.  In the western half of the street vehicles approach from the west.  In the eastern half, vehicles come from the opposite direction!  Combine that with angle parking which means that vehicles could also be reversing at any time and you have an exciting and challenging pedestrian environment.

I tried walking in front of two vehicles when I was taking these photographs, just to see if the motorists understood the Shared Space concept. It was like a game of "chicken". Most Perth cars have dark tinted windows, combine that with reflections on the windscreen and it can be difficult to make eye contact to "negotiate" the space. The first person did not slow down at all so I bailed out.  For my second attempt, I got directly in front at a much earlier stage so the driver could clearly see me walking. Just before I leapt out of the way the driver stopped. I won. Heart pumping.

Walking in Bay View Terrace is not recommended for people who are elderly or young children, or adults with prams, or people carrying shopping, or anyone having an interesting conversation that will divert their attention.  All these groups will be much better off going to the Claremont Quarter Shopping Centre around the corner.  Even though there is actually enough space for car parking in the mall, that centre has decided that the shopping experience is much better without vehicles. 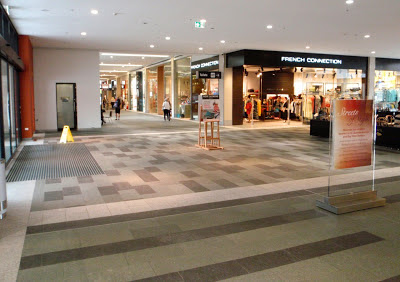 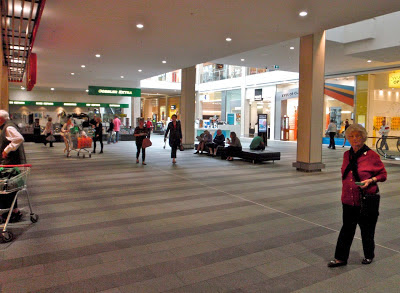 The Town of Claremont has spent $4.25 million on the Bay View Terrace upgrade but it will not be a success as long as they keep the current pro-vehicle policy and design.  It does not help that the Main Roads Department have also made the speed limit 20 km per hour through the street.  I suspect that the Town of Claremont will put some of the blame for the failure of the project on that one issue that is beyond their control. 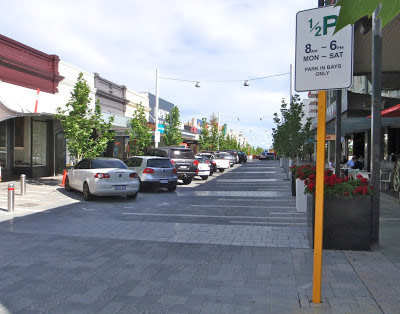 What is even more worrying is that they might start believing their own promotional spin and think it is all OK.  They just might have to issue everyone with high-vis vests prior to going shopping. 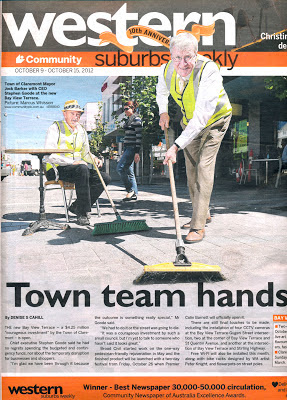 Even some of the most prominent supporters of Shared Space have low expectations for a what makes a street good for pedestrians.  This strange interview with the UK's Ben Hamilton-Baille shows him talking about Shared Space principles that have been applied to the Bristol Temple Meads railway station area.  If you can not stand the waffle, just zoom ahead to the 1:55 mark to watch the pedestrian run across the road to get out of the way of a taxi.

One final note.  I could not find any bicycle parking in the new Bay View Terrace.  There are still a few jobs in progress so hopefully that problem will be fixed in the coming weeks. 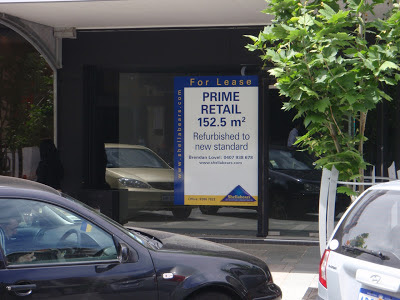