The City of Perth is digging up Museum Street, Northbridge. It's a short connection about 100 metres long between Aberdeen and Francis Streets. The work is a complete rebuild which includes new trees, lighting and realigning kerbs. Information is available on the city website.

It will be an improvement for pedestrians and create another space for the students from the adjoining colleges to sit during breaks. For people riding bicycles it is an incredibly poor design. Why is the City of Perth still excluding bicycles from planning decisions?

This is the artist impression of the completed works. The car lane is narrow and one-way. Any bicycle traffic is suppose to use a 'shared path' on the right. You can't see it? It's meant to be somewhere among all those people, trees and furniture.


Confident people on bicycles will take-the-lane in front of cars when travelling north rather than tediously meandering through pedestrians and furniture. For those travelling south I would not be surprised to see riders sprinting along the street illegally if there are no cars coming. Bad design encourages antisocial behaviour.

Here is the 'before' street plan. 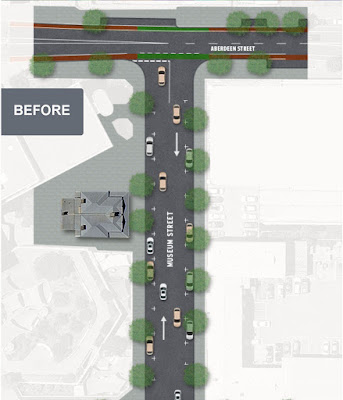 Here is one layer of the 'after' plan showing the proposed widened footpath on the left. It is achieved by removing one vehicle lane and eight parking bays. The footpath will be designated a 'shared path' which means you can ride on it but pedestrians have priority. 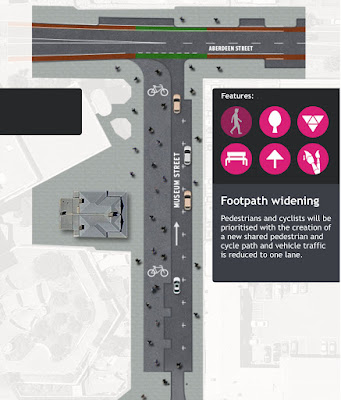 What the image above does not show are the new trees and furniture. Once those obstructions are added the sub-standard shared-path becomes almost useless. 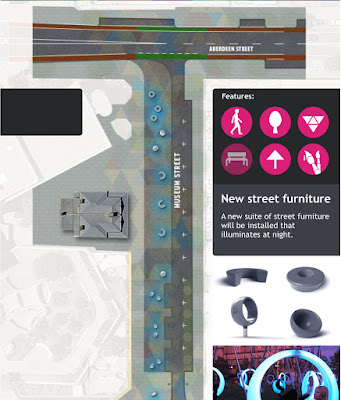 A more correct image of the proposal would show the bicycle riders who will be forced to push past people sitting and talking. They will have no choice. This 'place activation' will suffer from bad design that does not respect everyone's needs.

Even without the trees and furniture, a shared path in this position is a poor design option. A person riding along the existing bicycle lane on Aberdeen Street needing to turn into Museum Street will not easily recognise the change to a shared path. Bicycle paths should be continuous and intuitive.

Museum Street is located in the middle of the Central Institute of Technology. Similar to a university, it's a modern open-style campus with seven buildings grouped around Aberdeen and Museum Street. There is a high percentage of teenage students, and considering the lack of quality paths, there are quite a lot of bicycles used for transport. 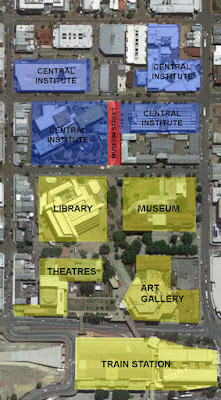 The idea to improve the amenity of the street has merit. The old street layout was very wide and unwelcoming. However, it did allow access for a person riding a bicycle in either direction, there were no pinch-points and it was relatively safe because of the extra width.

It is difficult to understand how a local government can undertake these expensive street works and virtually ignore the movement of bicycles. The City of Perth likes to brag about how much money they spend on bicycle riding in the city but they obviously still do not understand the basics of what is required. If the City of Perth is genuine about improving bicycle riding infrastructure, each time a street is dug up best practice should be applied to the new works. Most times it will not cost any more, it is just a matter of adjusting the priorities and applying good design.

It is disappointing when we wait for years for improvements to streets, but it is worse when it finally happens and our money is being spent the wrong way.

A summary and a solution

The 'before' version of Museum Street prioritised motor vehicles. It was tolerable for bicycle riding and pedestrians. It was not a destination.

With the City of Perth's enhancement Museum Street will become a destination. Pedestrians will have an improved experience. Motor vehicle access will be reduced a little. However, bicycle riding will be obstructed. This imbalance should be corrected.

Most of the construction work has been finished at Museum Street but there is still a simple solution available. Motor vehicle access should be prohibited and that lane changed into a bi-directional bicycle path. This could be done by adding a single bollard at each end of the street. Motor vehicles do not need to be driven on this street. The car parking spaces are not required either, there are 614 bays underneath the library just 100m away.

With a bicycle-friendly enhancement of Museum Street it will become a better destination. There will be no noise and fumes from vehicles. People trying to enjoy the space will not be hindered by riders needing to use the footpath. Pedestrians will also have a better experience. People on bicycles will be to be able to move safely and easily along the street in both directions. Motor vehicle drivers will hardly notice any difference. This is what it would look like. Call the City of Perth and ask for the change.